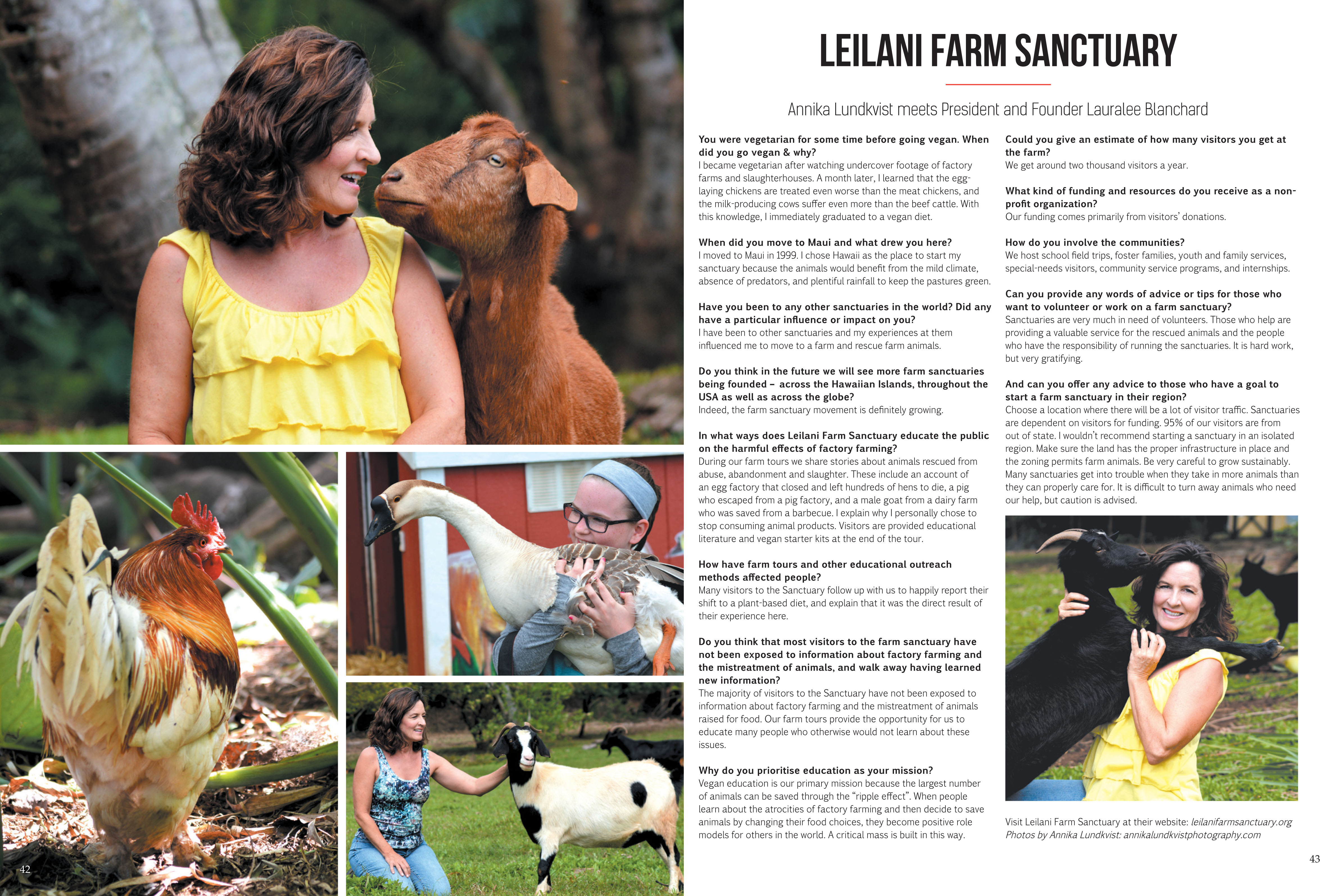 An interview + photos I did with Laurelee at Leilani Farm Sanctuary of Maui​ is in the July/August 2015 issue of Vegan Life Magazine​! Fantastic sanctuary & fantastic magazine! Bringing Vegan into Vogue’ is their mantra & I love being a contributor to this UK based magazine. 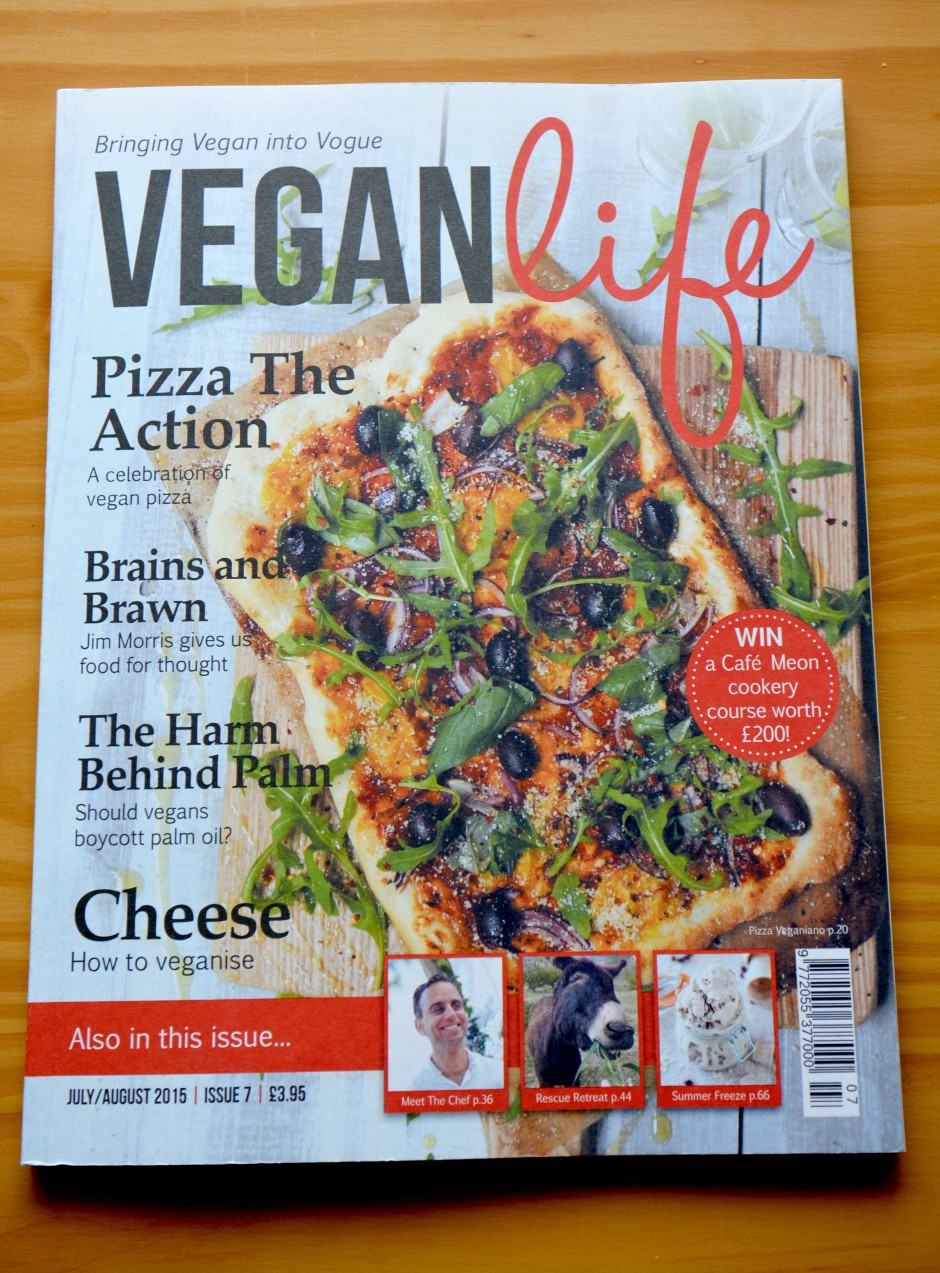 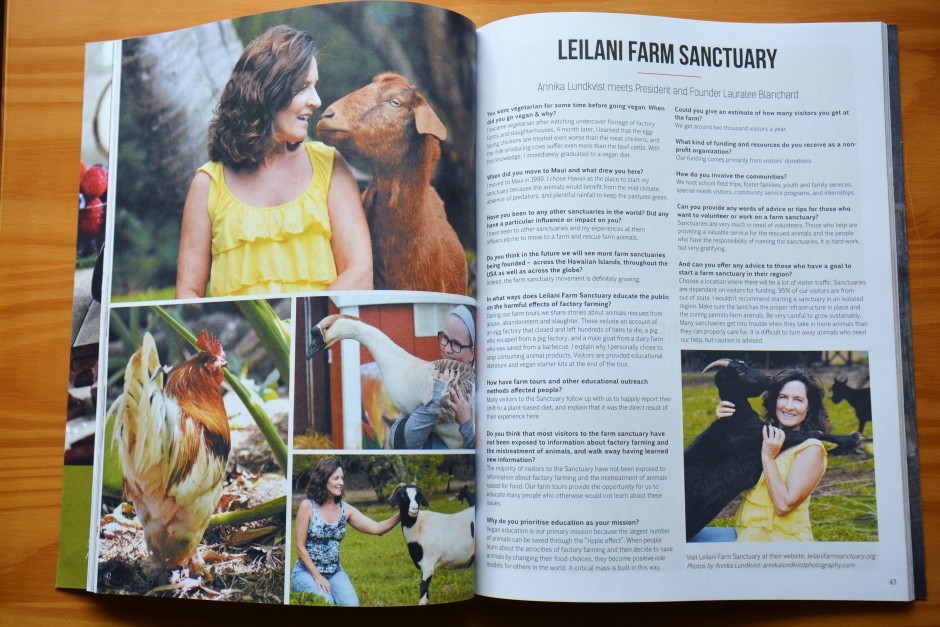 Q & A with Laurelee Blanchard

Annika: You were vegetarian for some time before going vegan. When did you go vegan & why?

Lauralee: I became vegetarian after watching undercover footage of factory farms and slaughterhouses. A month later, I learned that the egg-laying chickens are treated even worse than the meat chickens, and the milk-producing cows suffer even more than the beef cattle. With this knowledge, I immediately graduated to a vegan diet.

Annika: When did you move to Maui & what drew you here?

Lauralee: I moved to Maui in 1999. I chose Hawaii as the place to start my sanctuary because the animals would benefit from the mild climate, absence of predators, and plentiful rainfall to keep the pastures green.

Annika: Have you been to any other sanctuaries in the world? Did any have a particular influence or impact on you?

Lauralee: I have been to other sanctuaries and my experiences at them influenced me to move to a farm and rescue farm animals.

Annika: Do you think in the future we will see more farm sanctuaries being founded- across the Hawaiian Islands, throughout the USA as well as across the globe?

Annika: In what ways does Leilani Farm Sanctuary educate the public on the harmful effects of factory farming?

Lauralee: During our farm tours we share stories about animals rescued from abuse, abandonment and slaughter. These include an account of an egg factory that closed and left hundreds of hens to die, a pig who escaped from a pig factory, and a male goat from a dairy farm who was saved from a barbeque. I explain why I personally chose to stop consuming animal products. Visitors are provided educational literature and vegan starter kits at the end of the tour.

Annika: How have farm tours and other educational outreach methods affected people?

Lauralee: Many visitors to the Sanctuary follow up with us to happily report their shift to a plant-based diet, and explain that it was the direct result of their experience here.

Annika: Do you think that most visitors to the farm sanctuary have not been exposed to information about factory farming and the mistreatment of animals, and walk away having learned new information?

Lauralee: The majority of visitors to the Sanctuary have not been exposed to information about factory farming and the mistreatment of animals raised for food. Our farm tours provide the opportunity for us to educate many people who otherwise would not learn about these issues.

Annika: Why do you prioritize education as your mission?

Lauralee: Vegan education is our primary mission because the largest number of animals can be saved through the “ripple effect”. When people learn about the atrocities of factory farming and then decide to save animals by changing their food choices, they become positive role models for others in the world. A critical mass is built in this way.

Annika: Could you give an estimate of how many visitors visit the farm?

Annika: What kind of funding and resources do you receive as a non-profit organization?

Annika: How do you involve the communities?

Annika: Can you provide any words of advice or tips for those who want to volunteer or work on a farm sanctuary?

Lauralee: Sanctuaries are very much in need of volunteers. Those who help are providing a valuable service for the rescued animals and the people have the responsibility of running the sanctuaries. It is hard work, but very gratifying.

Annika: Can you provide any words of advice or tips for those who have a goal to start a farm sanctuary in their region?

Lauralee: Choose a location where there will be a lot of visitor traffic. Sanctuaries are dependent of visitors for funding. 95% of our visitors are from out of state. I wouldn’t recommend starting a sanctuary in an isolated region.

Make sure the land has the proper infrastructure in place and the zoning permits farm animals.

Be very careful to grow sustainably. Many sanctuaries get into trouble when they take in more animals than they can properly care for. It is difficult to turn away animals who need our help, but caution is advised. 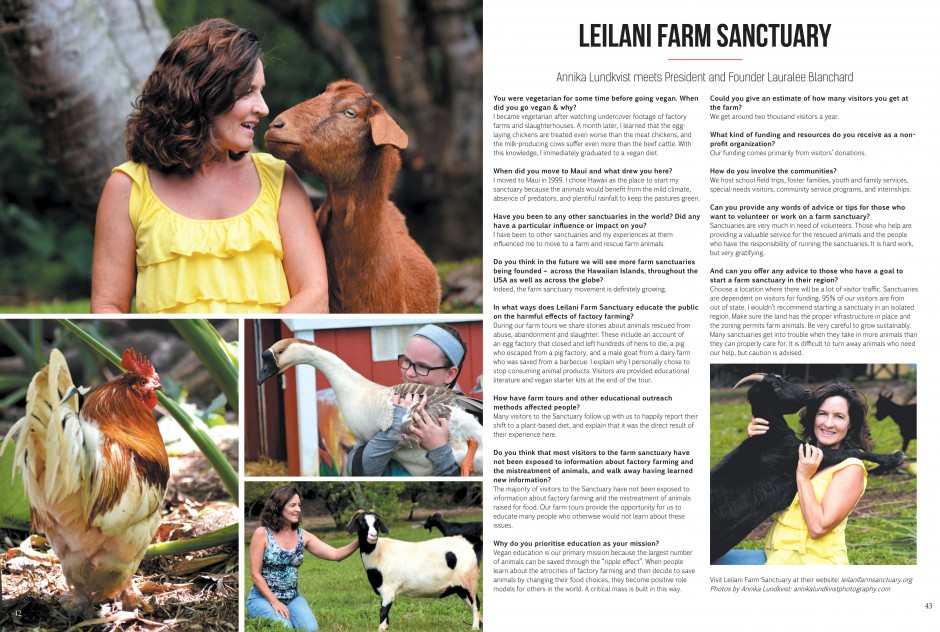