Interview & photos with Marisa Miller-Wolfson, director & editor of Vegucated in

It was wonderful to meet this vivacious & bright mama & her children in NYC for this series & a little play. Thank you for your time Marisa! 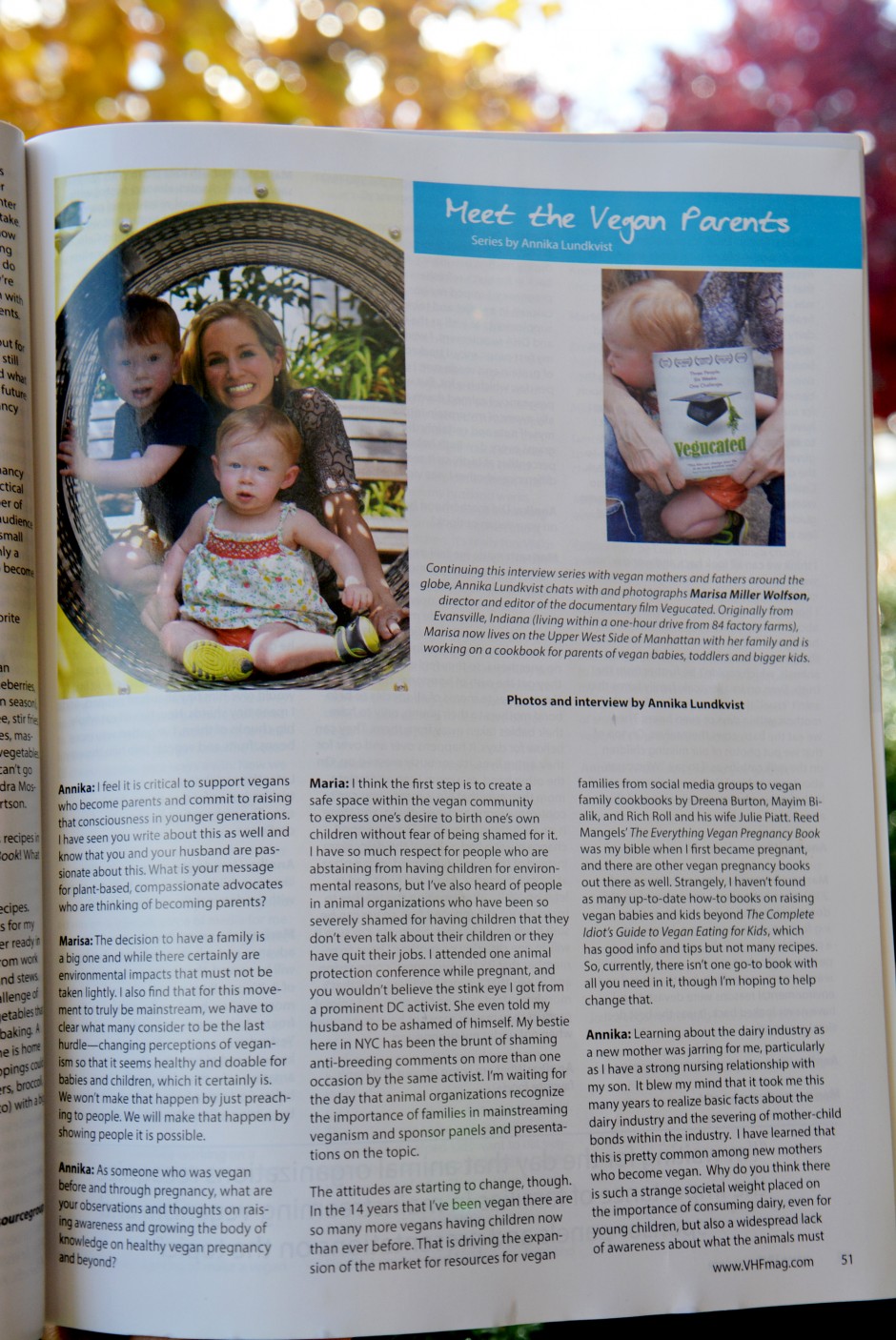 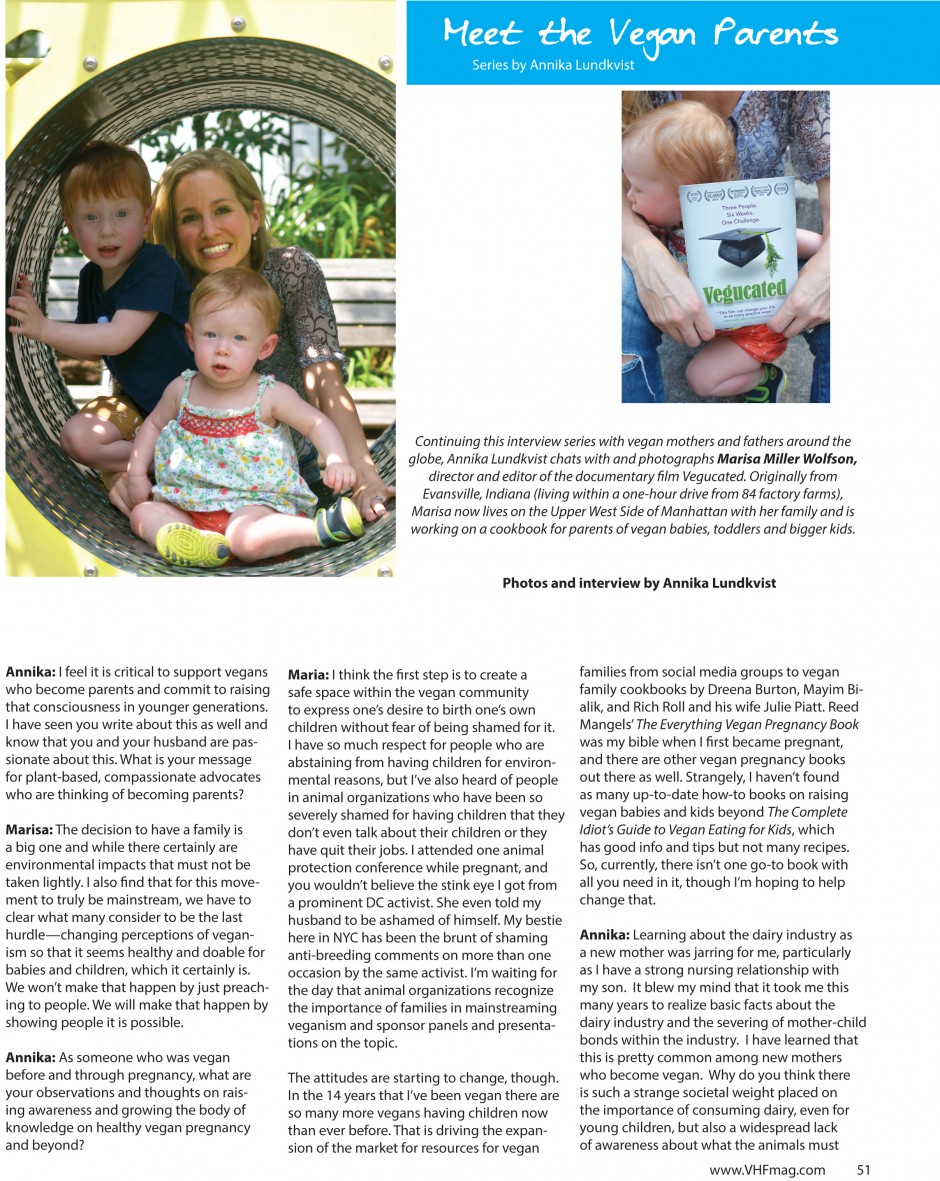 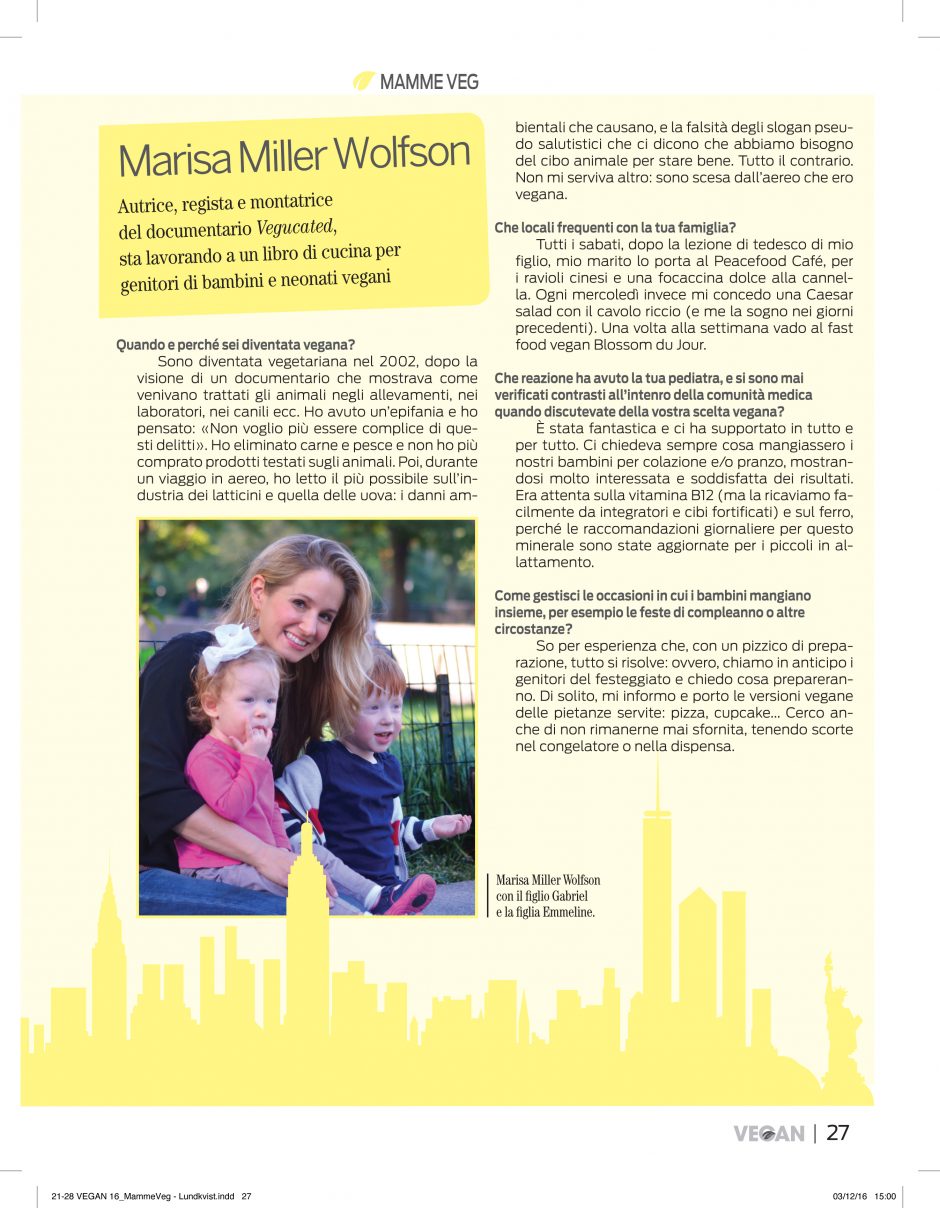 Marisa Miller Wolfson is the writer, director and editor of the documentary Vegucated and is currently working on a cookbook for parents of vegan babies and toddlers.

Annika: When & why did you become vegan:

Marisa: I went vegetarian in January of 2002 after I attended a documentary film screening about how animals were treated on farms, in laboratories, at shelters, etc. I had a real “aha” moment there and thought to myself, “all these terrible things can happen, but not because of me.” I swore off meat and fish and stopped buying products that were tested on animals. At that film event I picked up literature about veganism but sort of forgot about it until three months later when I was about to fly home to the Midwest and needed some reading material for the flight. I read all about the cruelty inherent in the egg and dairy industries, the environmental devastation that they cause, and a thorough debunking of the myth that we need any animal products to be healthy. In fact, it was better for your heart, etc. if you didn’t eat them. So that was that. By the time the plane touched down I was vegan.

Annika: How did your community of family & friends react to your choice to be vegan?

Marisa: My mom, whom I surprised with my visit home, was the first to know. She asked me if I was “going to become one of those plastic shoe-wearing radicals.” I vowed I would not…and then I did. And now she couldn’t be prouder of me. She tries to be vegetarian, and my dad eats vegan when he is around me too. My brother—well, he’s another story. He doesn’t joke as much about it, but for a good year he poked fun at me. I did become closer to my vegetarian friends, but my non-veg friends didn’t give me grief at all. In fact, many of them have become more vegan-leaning as a result of my influence—or maybe just my proximity and sharing vegan meals with me.

Annika: NYC is noted as one of the most vegan friendly cities, with such a growing number of vegan and vegan friendly cafes and restaurants as well as landmark plant based culinary establishments. What has it been like to witness this growth and what are your thoughts on the vegan scene and movement in NYC?

Marisa:Oh, I can’t even keep up with all the new vegan restaurant openings. There are still so many fabulous new vegan restaurants that I want to try. With two little ones at home my husband and I haven’t been going out to dinner as often as before, but when we do we pick a new vegan place we’ve never been to before. Our last one was a French restaurant called Delice & Sarrasin that has a mostly vegan menu. The crepes were so good. Our prior dinner date was at 00 & Co., a new vegan pizza restaurant that makes an amazing bruschetta. New York City has the highest number of vegan restaurants in the country and, I assume, the world. When I first went vegan there were just a handful but now there are three within a three-minute walk from my apartment. Yesterday I was on a walk with my family and checked out a new local bazaar with shops and food stands and ran into Hunnybon, a 100% vegan candy stand. I can’t even imagine how vegan-friendly this city will be when he and his sister are adults.

Annika: What are some of you and your family’s favorite dining spots?

Marisa: Every Saturday after my son’s German class my husband takes him to Peacefood Café down the street from us for dumplings and a cinnamon bun. I have a kale caesar salad there every Wednesday when I meet with the co-author of my new book project. I crave it all week. Once a week when I’m feeling too lazy to cook I go to Blossom du Jour, the vegan fast food place around the corner for something quick and yummy. We also enjoy a weekend lunch at The Hummus Place, which isn’t vegan but has the best hummus and falafel in town.

Annika: What are your favorite dishes to make at home for your family?

Marisa: Both my kids can be picky but in completely different ways so it’s not always easy to find something for everyone, but the one hit amongst everyone is a basil-cilantro pesto pasta that’s made with almonds instead of pine nuts. We’re really into sauces because they make veggies taste really good, and my son especially isn’t into most vegetables. We do a peanut sauce or a tahini sauce over veggies, beans and quinoa, rice or millet. They take five minutes to make in the blender, and it takes ten minutes to steam or saute the veggies. But my favorite things to make for my family are birthday cakes and delicious baked goods for holidays and special occasions. I’m a baker at heart. Vegan cake is so good, and so many easily accessible fondants, sugar pastes, and food colorings are vegan. I love to create cakes featuring my kids’ favorite things. This year it was a kitty cat cake for my daughter’s first birthday and a superhero cake for my son’s fourth birthday last week. We use spelt flour and almond meal instead of white flour, so even though it isn’t health food, it feels good to know we’re making healthier cakes than most kids get.

Annika: As I understand, it is not difficult to find a pediatrician in NYC who is savvy about vegan lifestyle and plant based nutrition. What was the response of your children’s doctor and did you ever have any issues within the medical community discussing your family’s choice to be vegan?

Marisa: At one point early in my first pregnancy our OBGYN pointed out that our baby needed cholesterol for proper growth. I had to remind him that I make my own cholesterol, so the baby will not be missing out if I don’t consume any myself. Our pediatrician has been fantastic and nothing but supportive. At our wellness visits she asks what they ate for breakfast and/or lunch that day and is always interested/satisfied with the results. She also asks about vitamin B12 , which is absolutely crucial and easy to get from vitamins and fortified foods, and iron for the little one because the current iron recommendations for breastfed babies have just been upped.

Annika: How do you handle social situations for your children like birthday parties or other events with their peers?

Marisa: I’ve learned that you just need a little preparation and there will be no drama. That means calling the parent of the birthday kid ahead of time and asking what will be served. Sometimes the parent asks for suggestions on how to make the party more vegan-friendly for my child, but usually I bring a vegan equivalent of the main dish being served. Usually in NYC it’s pizza, so I toss a quick pizza marinara in the oven a little before we leave, then we go to Peacefood Café on the corner, where Gabriel picks out a cupcake. I know most parents aren’t so lucky to be so close to a vegan bakery, so they keep a batch in the freezer. We also keep a batch of cupcakes in the freezer at Gabriel’s school so he’ll have one on hand whenever there is a birthday in class.

Halloween is coming up next week, and we’ll go trick or treating in the neighborhood. Gabriel is amazing about not getting upset when the candy isn’t vegan and we pass it up or take it and give it to a friend. I swear he could be alone in a room with a non-vegan cupcake for an hour and never think of eating it because it’s not vegan. My friends who were raised kosher say they were the same way as kids. It’s just who they are. Surprisingly, a lot of Halloween candy happens to be vegan accidentally, so he’ll have plenty of treats.

Annika: You’re working on a plant based cookbook for children which is very exciting! Can you share a bit about that and when we can look forward to ordering and reading it?

Marisa: If only I knew! We’re in such early stages, finishing up the proposal to give to our agent, who will look for a publisher. Yes, we’re excited because there currently are no cookbooks on the market geared towards parents of vegan babies and toddlers. More and more vegans are having babies, and there is a big gap to be filled.

This interview is part of an ongoing interview series by Annika Lundkvist with vegan mothers and fathers around the globe. For more interviews and information please visit this page: Interview Series: Vegan Pregnancy, Parenting & Kids.

I’ll be photographing at Vegomässan this weekend in Nacka!