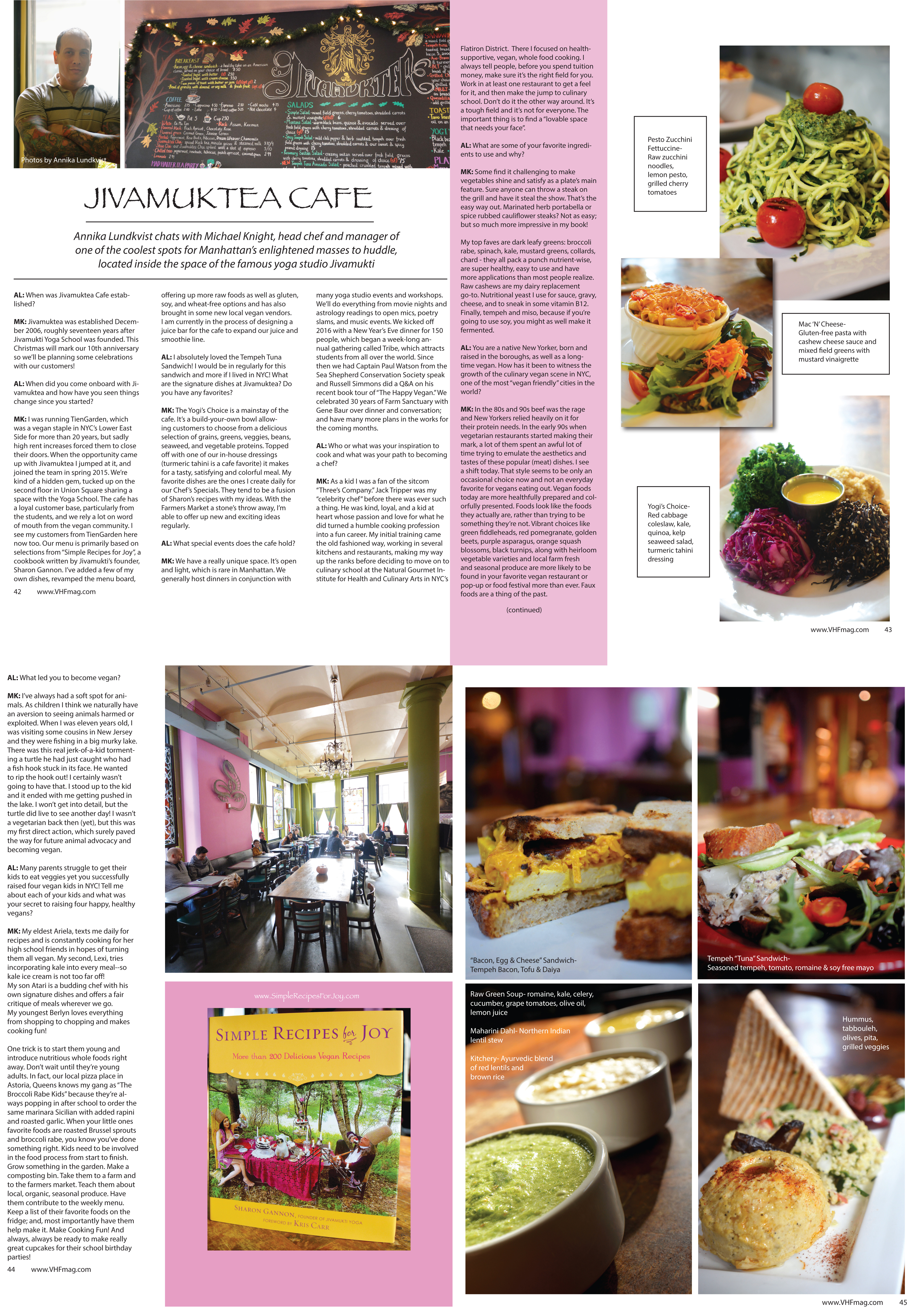 I loved Jivamuktea Cafe from my very 1st visit & meal there earlier this year, so it was a great pleasure to have the opportunity to photograph several of their dishes and interview head chef and manager Michael Knight. Appears in the May/June issue of Vegan Health & Fitness magazine! 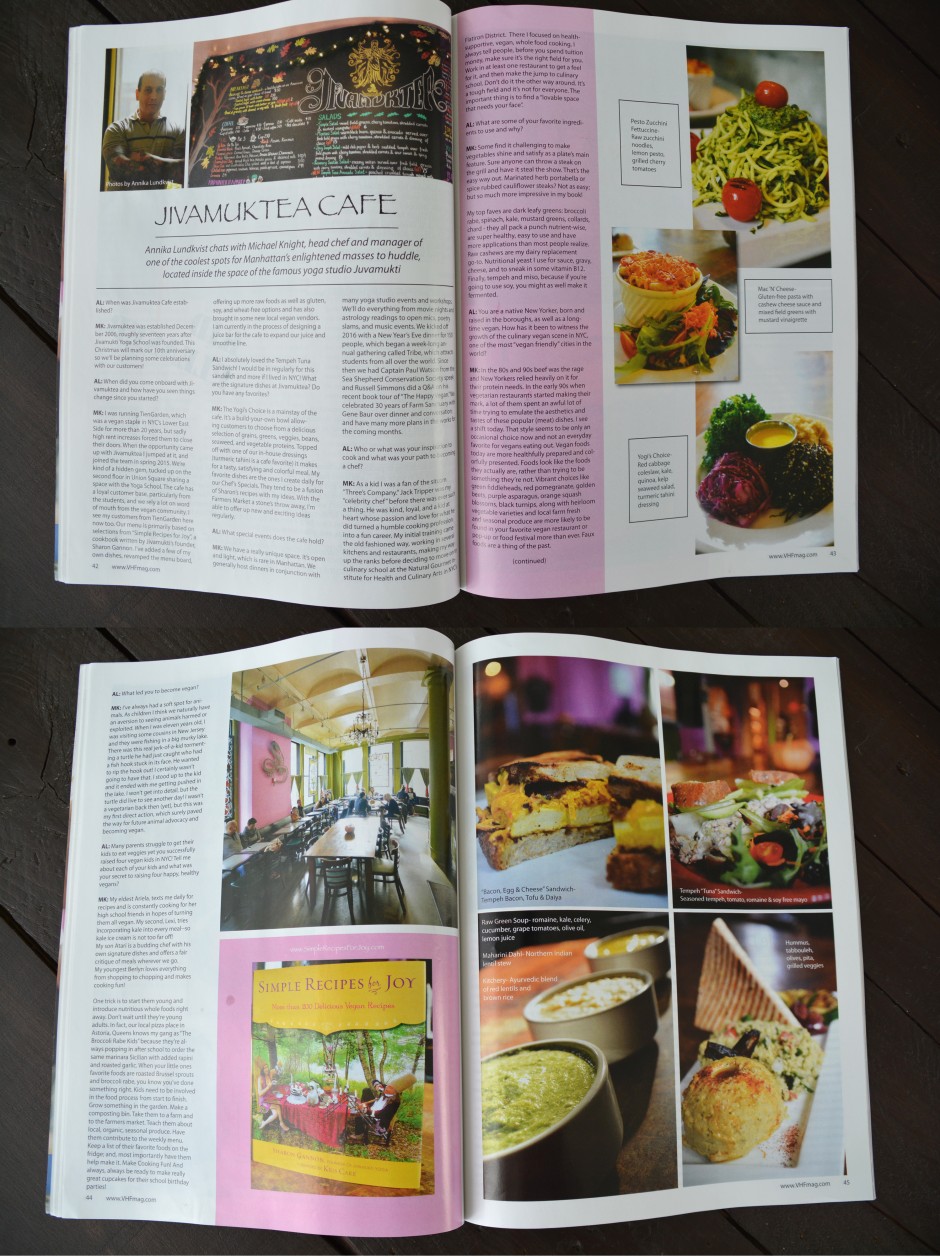 Annika: When was Jivamuktea Cafe established?

Michael: Jivamuktea was established December 2006, roughly seventeen years after Jivamukti Yoga School was founded. This Christmas will mark our 10th anniversary so we’ll be planning some celebrations with our customers!

Annika: When did you come onboard with Jivamuktea and how have you seen things change since you started?

MIchael: I was running TienGarden, which was a vegan staple in NYC’s Lower East Side for more than 20 years, but sadly high rent increases forced them to close their doors. When the opportunity came up with Jivamuktea I jumped at it, and joined the team in spring 2015. We’re kind of a hidden gem, tucked up on the second floor in Union Square sharing a space with the Yoga School. The cafe has a loyal customer base, particularly from the students, and we rely a lot on word of mouth from the vegan community. I see my customers from TienGarden here now too. Our menu is primarily based on selections from “Simple Recipes for Joy”, a cookbook written by Jivamukti’s founder, Sharon Gannon. I’ve added a few of my own dishes, revamped the menu board, offering up more raw foods as well as gluten, soy, and wheat-free options and brought in some new local vegan vendors. I am currently in the process of designing a juice bar for the cafe to expand our juice and smoothie line.

Annika: I absolutely loved the Tempeh Tuna Sandwich! I would be in regularly for this sandwich and more if I lived in NYC! What are the signature dishes at Jivamuktea? Do you have any favorites?

Michael: The Yogi’s Choice is a mainstay of the cafe. It’s a build-your-own bowl allowing customers to choose from a delicious selection of grains, greens, veggies, beans, seaweed, and vegetable proteins. Topped off with one of our in-house dressings (turmeric tahini is a cafe favorite) it makes for a tasty, satisfying and colorful meal. My favorite dishes are the ones I create daily for our Chef’s Specials. They tend to be a fusion of Sharon’s recipes with my ideas. With the Farmers Market a stone’s throw away, I’m able to offer up new and exciting ideas regularly.

Annika: What special events does the cafe hold?

Michael: We have a really unique space. It’s open and light, which is rare in Manhattan. We generally host dinners in conjunction with many yoga studio events and workshops. We’ll do everything from movie nights and astrology readings to open mics, poetry slams, and music events. We kicked off 2016 with a New Year’s Eve dinner for 150 people, which began a week-long annual gathering called Tribe, which attracts students from all over the world. Since then we had Captain Paul Watson from the Sea Shepherd Conservation Society speak and Russell Simmons did a Q&A on his recent book tour of “The Happy Vegan.” We celebrated 30 years of Farm Sanctuary with Gene Baur over dinner and conversation; and have many more plans in the works for the coming months.

Michael: As a kid I was a fan of the sitcom “Three’s Company”. Jack Tripper was my ‘celebrity chef’ before there was ever such a thing. He was kind, loyal, and a kid at heart whose passion and love for what he did turned a humble cooking profession into a fun career. My initial training came the old fashioned way, working in several kitchens and restaurants, making my way up the ranks before deciding to move on to culinary school at the Natural Gourmet Institute for Health and Culinary Arts in NYC’s Flatiron District. There I focused on health-supportive, vegan, whole food cooking. I always tell people, before you spend tuition money, make sure it’s the right field for you. Work in at least one restaurant to get a feel for it, and then make the jump to culinary school. Don’t do it the other way around. It’s a tough field and it’s not for everyone. The important thing is to find a “lovable space that needs your face”.

Annika: What are some of your favorite ingredients to use and why?

Michael: Some find it challenging to make vegetables shine and satisfy as a plate’s main feature. Sure anyone can throw a steak on the grill and have it steal the show. That’s the easy way out. Marinated herb portabella or spice rubbed cauliflower steaks? Not as easy; but so much more impressive in my book!

My top faves are dark leafy greens: broccoli rabe, spinach, kale, mustard greens, collards, chard – they all pack a punch nutrient-wise, are super healthy, easy to use and have more applications than most people realize. Raw cashews are my dairy replacement go-to. Nutritional yeast I use for sauce, gravy, cheese, and to sneak in some vitamin B12. Finally, tempeh and miso, because if you’re going to use soy, you might as well make it fermented.

Annika: You are a native New Yorker, born and raised in the boroughs, as well as being a long time vegan. How has it been to witness the growth of the culinary vegan scene in NYC, one of the most “vegan friendly” cities in the world?

Michael: In the 80s and 90s beef was the rage and New Yorkers relied heavily on it for their protein needs. In the early 90s when vegetarian restaurants started making their mark, a lot of them spent an awful lot of time trying to emulate the aesthetics and tastes of these popular (meat) dishes. I see a shift today. That style seems to be only an occasional choice now and not an everyday favorite for vegans eating out. Vegan foods today are more healthfully prepared and colorfully presented. Foods look like the foods they actually are, rather than trying to be something they’re not. Vibrant choices like green fiddleheads, red pomegranate, golden beets, purple asparagus, orange squash blossoms, black turnips, along with heirloom vegetable varieties and local farm fresh and seasonal produce are more likely to be found in your favorite vegan restaurant or pop-up or food festival more than ever. Faux foods are a thing of the past.

Annika: What led you to become a vegan?

Michael: I’ve always had a soft spot for animals. As children I think we naturally have an aversion to seeing animals harmed or exploited. When I was eleven years old, I was visiting some cousins in New Jersey and they were fishing in a big murky lake. There was this real jerk-of-a-kid tormenting a turtle he had just caught who had a fish hook stuck in its face. He wanted to rip the hook out! I certainly wasn’t going to have that. I stood up to the kid and it ended with me getting pushed in the lake. I won’t get into detail, but the turtle did live to see another day! I wasn’t a vegetarian back then (yet), but this was my first direct action, which surely paved the way for future animal advocacy and becoming vegan.

Many parents struggle to get their kids to eat veggies yet you successfully raised four vegan kids in NYC! Tell me about each of your kids and what was your secret to raising four happy, healthy vegans?

My eldest Ariela, texts me daily for recipes and is constantly cooking for her high school friends in hopes of turning them all vegan.My second, Lexi, tries incorporating kale into every meal–so kale ice cream is not too far off! My son Atari is a budding chef with his own signature dishes and offers a fair critique of meals wherever we go. My youngest Berlyn loves everything from shopping to chopping and makes cooking fun!

One trick is to start them young and introduce nutritious whole foods right away. Don’t wait until they’re young adults. In fact, our local pizza place in Astoria, Queens knows my gang as “The Broccoli Rabe Kids” beacause they’re always popping in after school to order the same marinara Sicilian with added rapini and roasted garlic. When your little ones favorite foods are roasted Brussel sprouts and broccoli rabe, you know you’ve done something right. Kids need to be involved in the food process from start to finish. Grow something in the garden. Make a composting bin. Take them to a farm and to the farmers market. Teach them about local, organic, seasonal produce. Have them contribute to the weekly menu. Keep a list of their favorite foods on the fridge; and, most importantly have them help make it.Make Cooking Fun! And always, always be ready to make really great cupcakes for their school birthday parties! 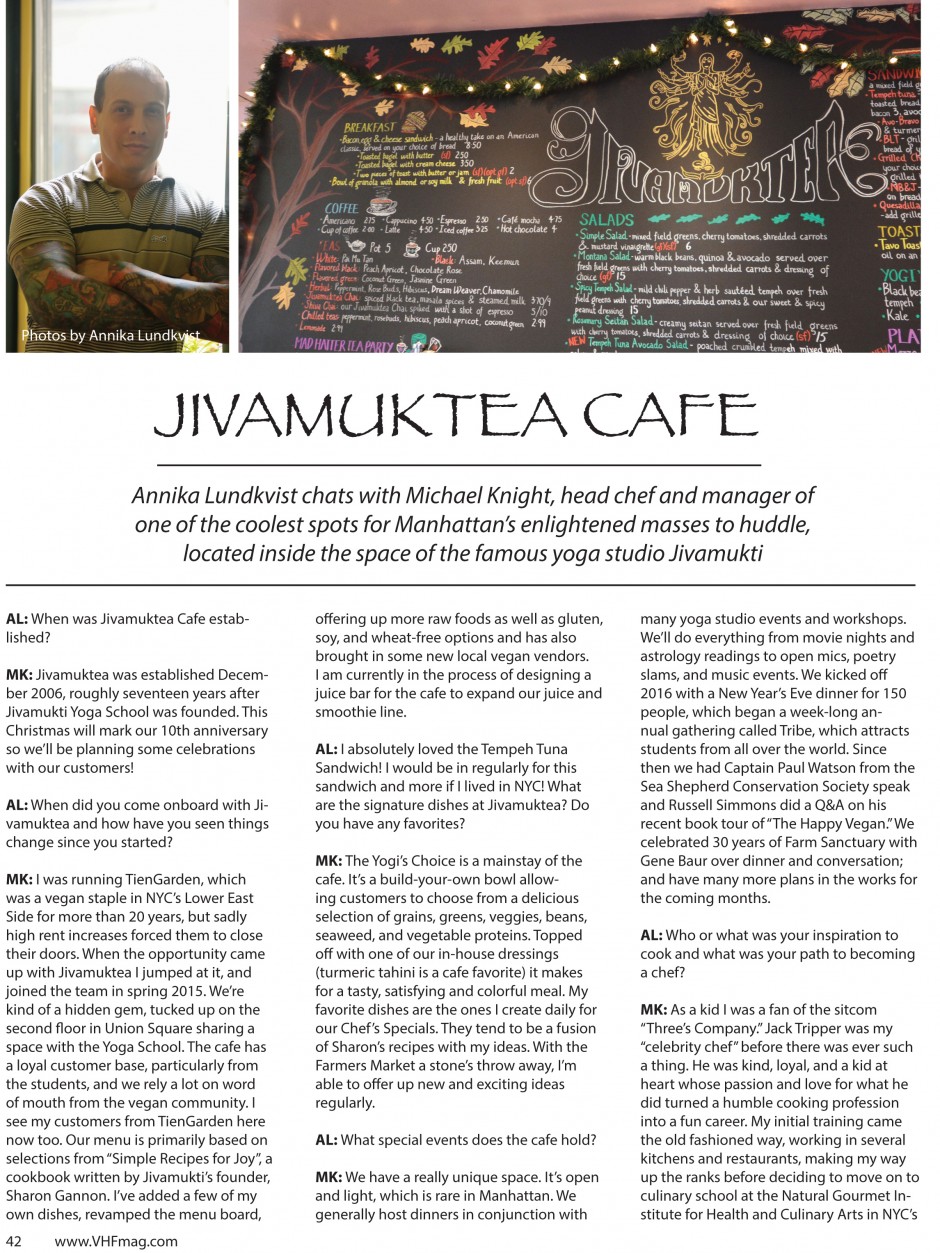 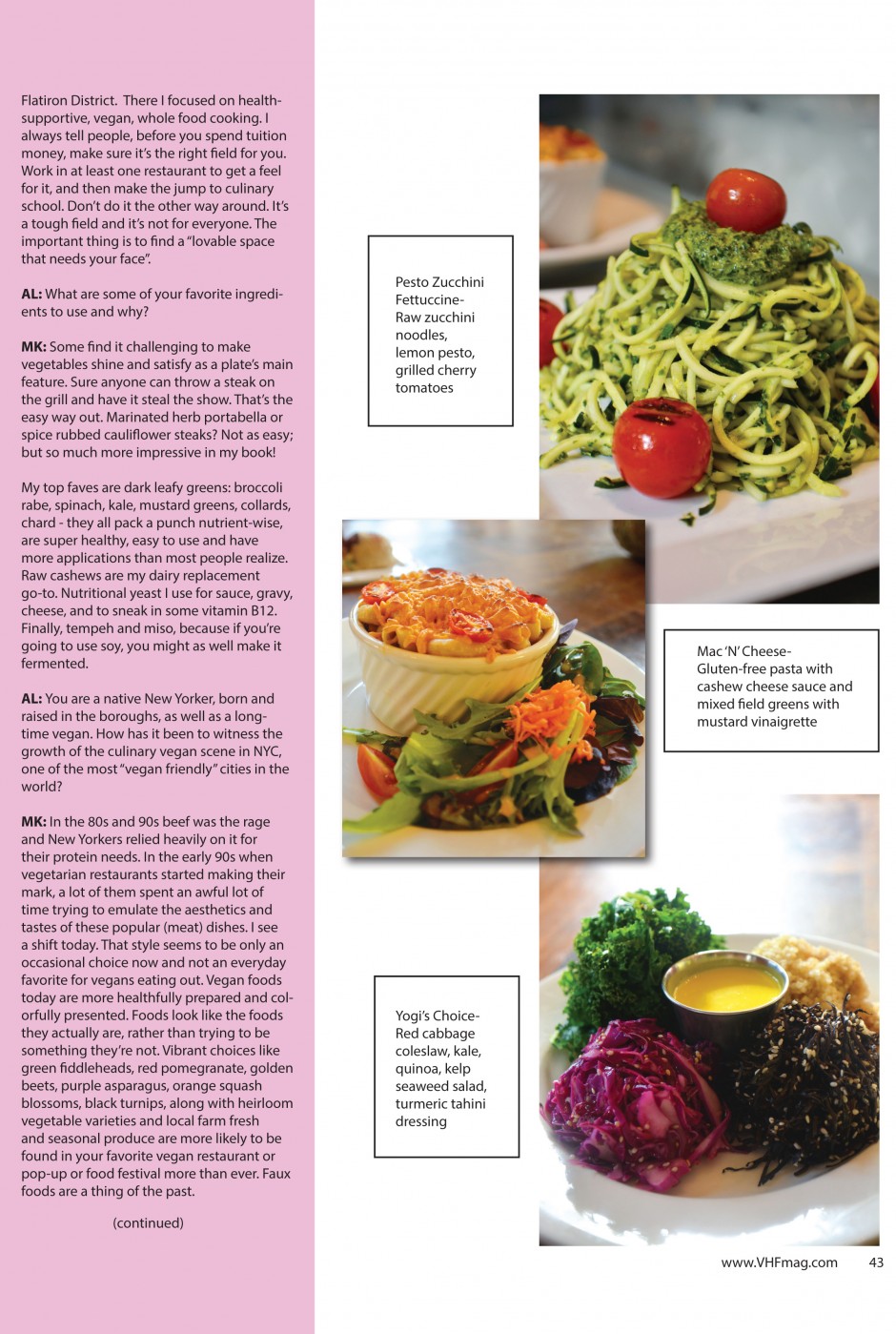 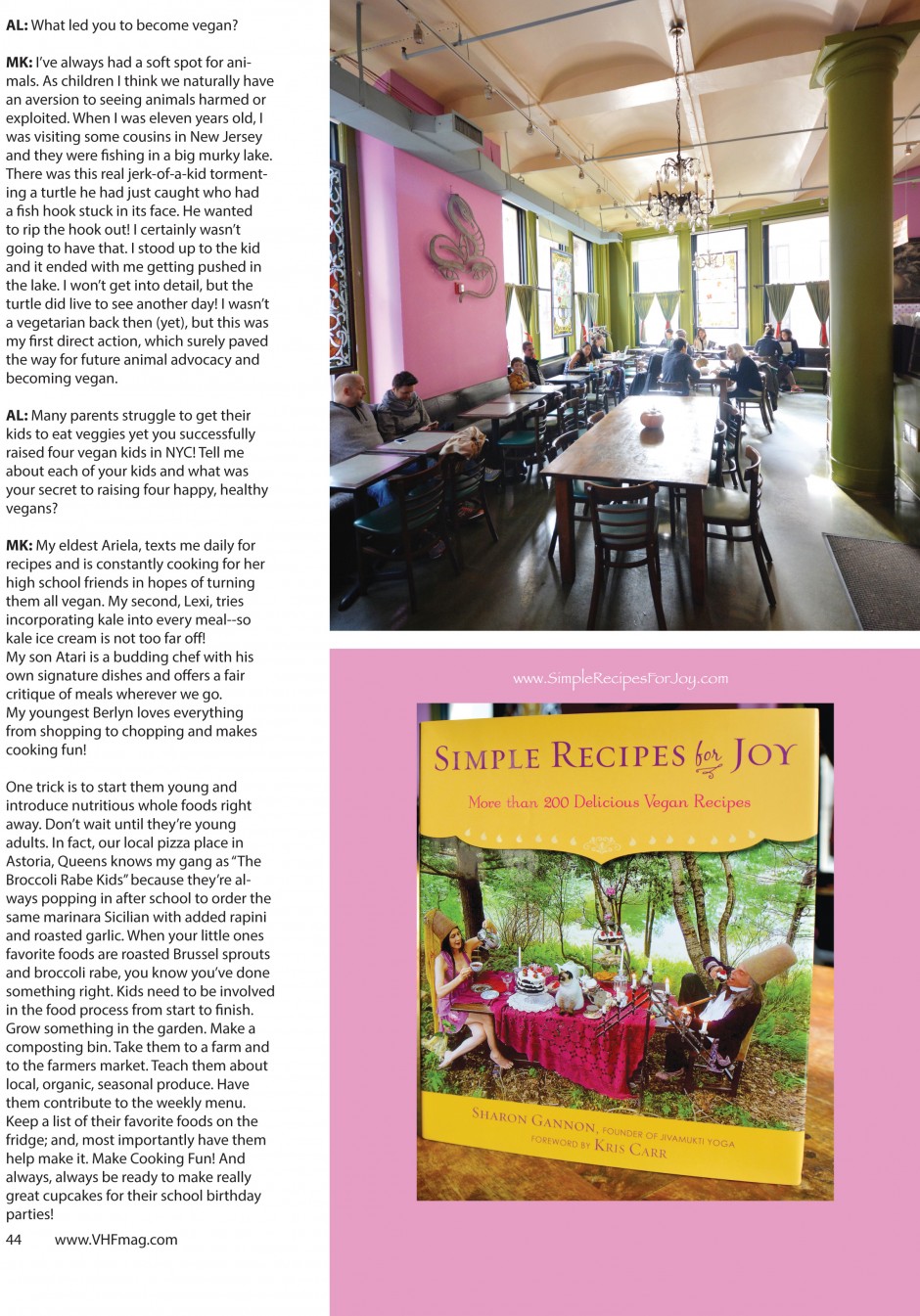 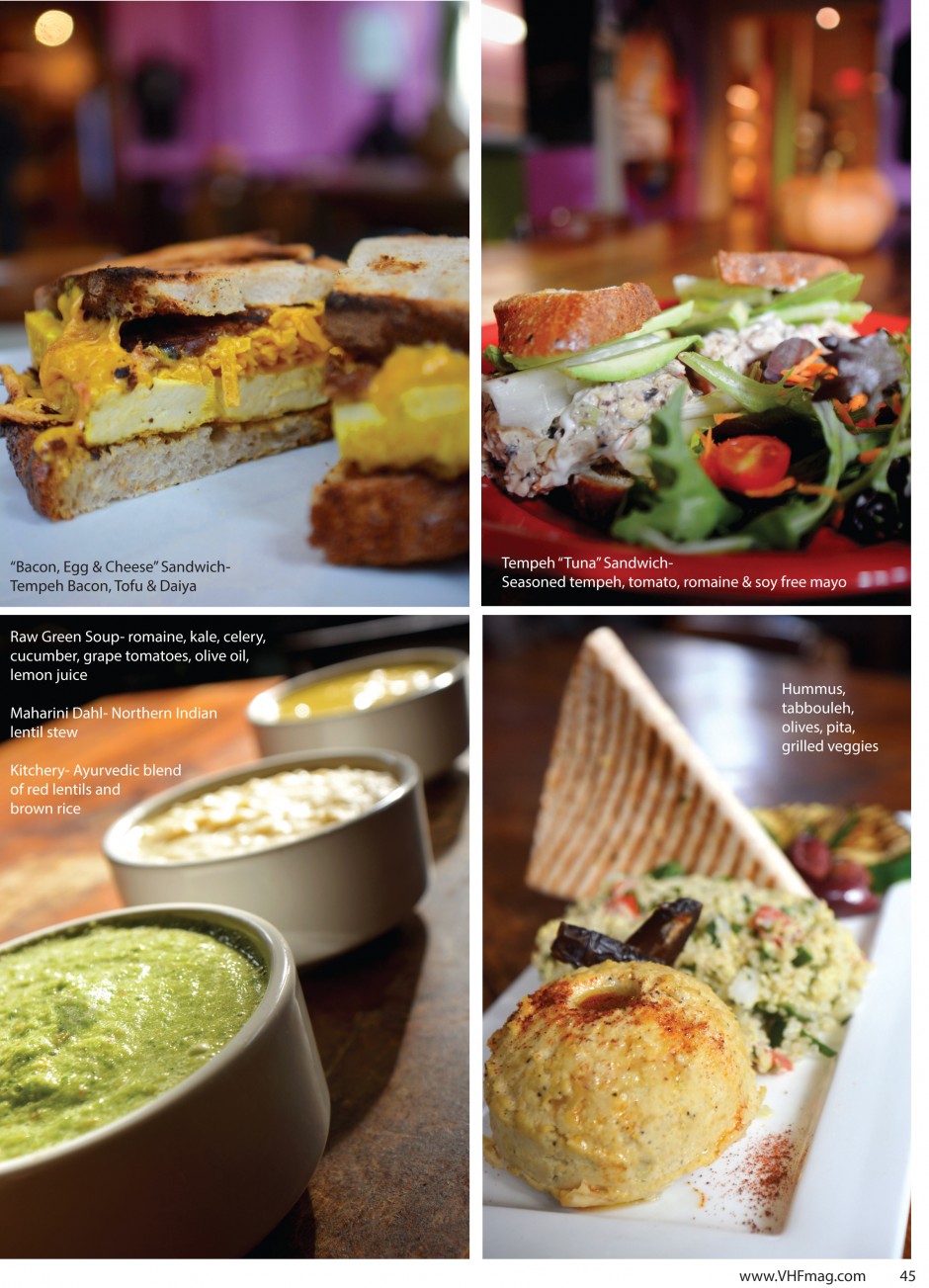