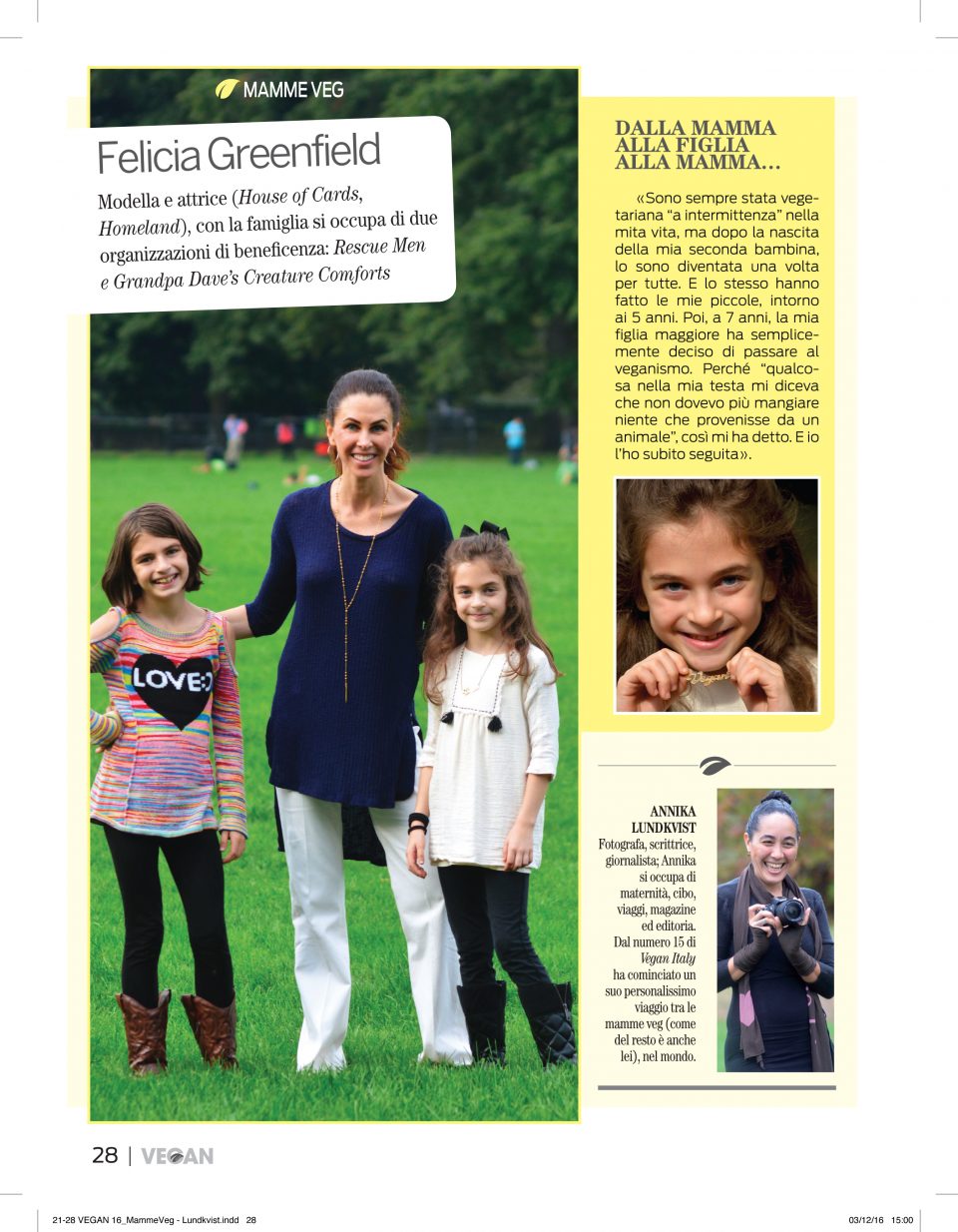 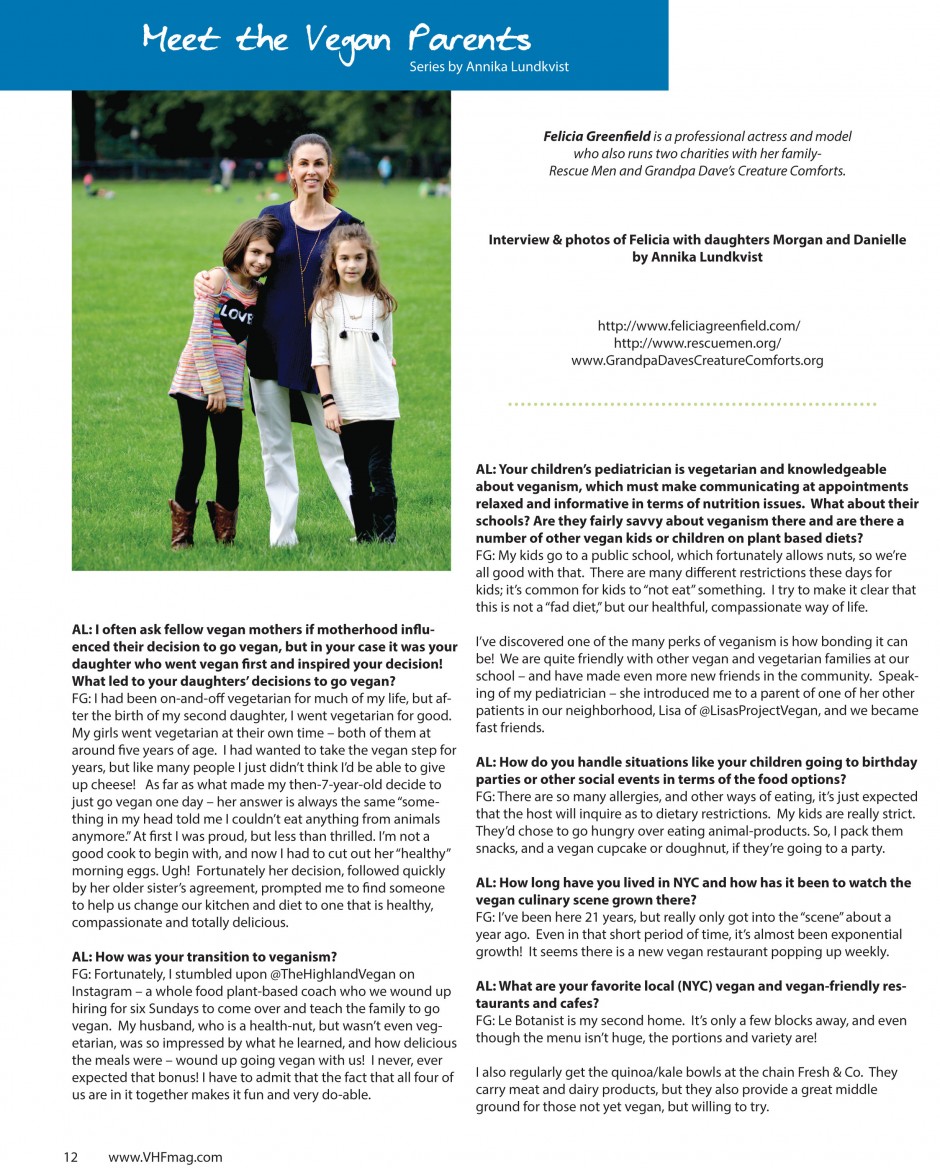 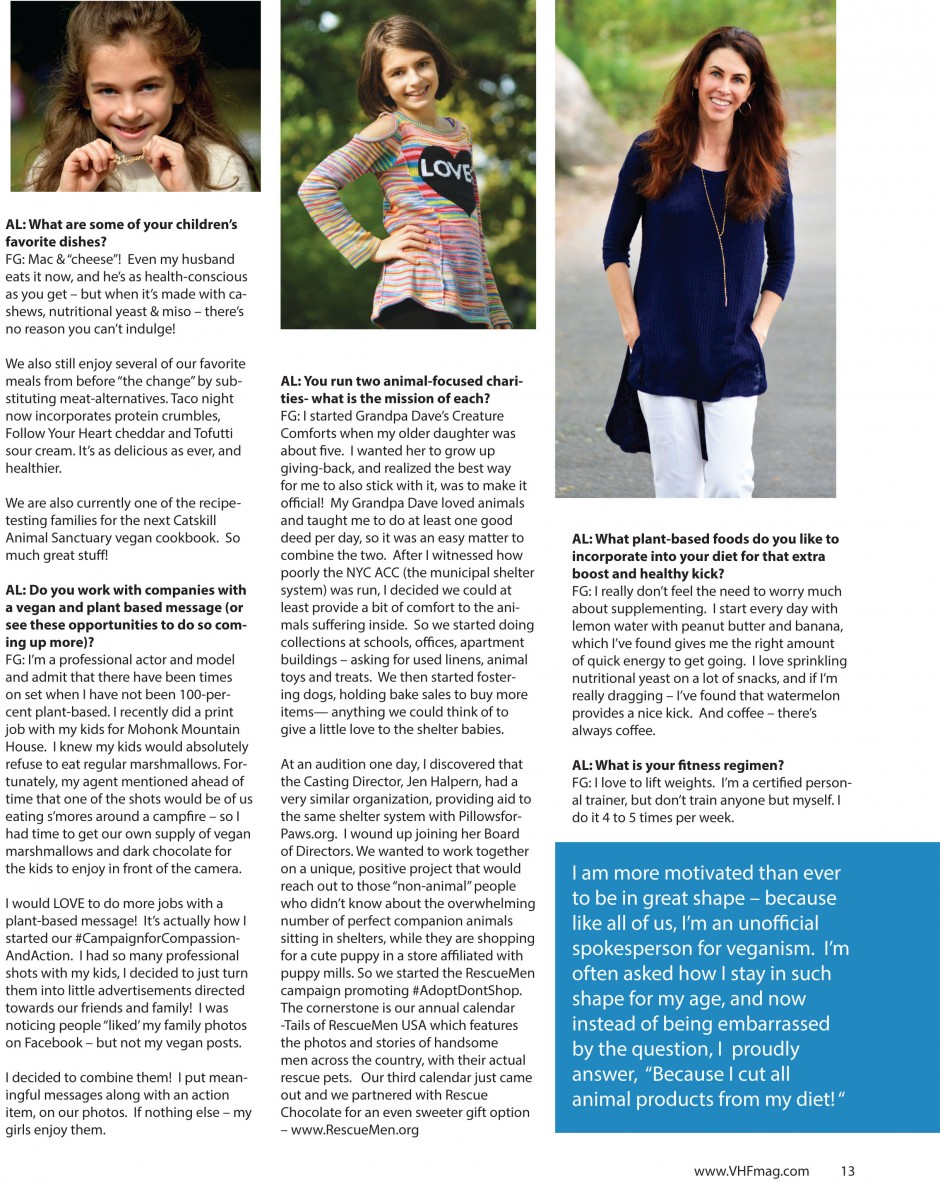 Also below are clips of my interview with & photography of Felicia & her daughters for Vegan Italy magazine
Felicia Greenfield is a professional actress and model who also runs two charities with her family- Rescue Men and Grandpa Dave’s Creature Comforts.

Annika: I often ask fellow vegan mothers if motherhood influenced their decision to go vegan, but in your case it was your daughter who went vegan first and inspired your decision! What led to your daughters decisions to go vegan?

Felicia: I had been on-and-off vegetarian for much of my life, but after the birth of my second daughter, I went vegetarian for good. My girls went vegetarian at their own time – both of them at around five years of age. I had wanted to take the vegan step for years, but like many people I just didn’t think I’d be able to give up cheese! As far as what made my then-7-year-old decide to just go vegan one day – her answer is always the same “something in my head told me I couldn’t eat anything from animals anymore.” At first I was proud, but less than thrilled – I’m not a good cook to begin with – and now I had to cut out her ‘healthy’ morning eggs. Ugh! Fortunately her decision, followed quickly by her older sister’s agreement, prompted me to find someone to help us change our kitchen and diet to one that is healthy, compassionate and totally delicious.
Annika:How was your transition to veganism?

Felicia: Fortunately, I stumbled upon @TheHighlandVegan on Instagram – a whole plant-based coach who we wound up hiring for six Sundays to come over and teach the family to go vegan. My husband, who is a health-nut, but wasn’t even vegetarian – was so impressed by what he learned, and how delicious the meals were – wound up going vegan with us! I never, ever expected that bonus! I have to admit that the fact all four of us are in it together makes it fun and very do-able.
Annika: Your children’s pediatrician is vegetarian and knowledgeable about veganism which must make communicating at appointments relaxed and informative in terms of nutrition issues. What about their schools- are they fairly savvy about veganism and are there a number of other vegan kids or children on plant based diets?

Felicia: My kids go to a public school, which fortunately allows nuts, so we’re all good with that. There are so many different restrictions these days amongst kids, it’s common for kids to “not eat” something. I try to make it clear that this is not a ‘fad diet,’ but our healthful, compassionate way of life.

I’ve discovered one of the many perks of veganism is how bonding it can be! We are quite friendly with the other vegan and vegetarian families at our school – and have made even more new friends in the community. Speaking of my pediatrician – she introduced me to a parent of one of her other patients in our neighborhood, Lisa of @LisasProjectVegan, and we became fast friends.
Annika: How do you handle situations like your children going to birthday parties or other social events in terms of preparing for the food options?

Felicia: There are so many allergies, and other ways of eating, it’s just expected that the host will inquire as to dietary restrictions. My kids are really strict, they’d chose to go hungry over eating animal-products, so I will always pack them snacks, and a vegan cupcake or doughnut, if they’re going to a party.
Annika: How long have you lived in NYC and how has it been to watch the vegan culinary scene grown there?

Felicia: I’ve been here 21 years, but really only got into the ‘scene’ about a year ago. However in THAT time, it’s almost been exponential growth! It seems there is a new vegan restaurant popping up weekly.
Annika: What are your favorite local (NYC) vegan and vegan friendly restaurants and cafes?
Felicia: Le Botanist is my second home. It’s only a few blocks away, and even though the menu isn’t huge, the portions and variety are! I also regularly get the quinoa/kale bowls at the chain Fresh & Co. They carry meat & dairy products, but they also provide a great middle ground for those not yet vegan, but willing to try.

Annika: What are some of your children’s favorite dishes?
Felicia: Mac n cheese! Even my husband eats it now, and he’s as health-conscious as you get – but when it’s filled with cashews, nutritional yeast & miso – there’s no reason you can’t indulge!
We also still have enjoy several of our favorite meals from before “the change” just by substituting meat-alternatives. Taco night now incorporates protein crumbles, Follow Your Heart cheddar & Tofutti sour cream. As delicious as ever, and healthier. We are currently one of the recipe-testing families for the next Catskill Animal Sanctuary vegan cookbook. So much great stuff!
Annika: Do you work with companies with a vegan and plant based message (or see these opportunities to do so coming up more)?

Felicia: I’m a professional actor & model and admit that there have been times on set when I have not been 100% plant-based. I recently did a print job with my kids for Mohonk Mountain House. but I knew my kids would absolutely refuse to eat regular marshmallows. Fortunately, my agent mentioned ahead of time that one of the shots would be of us eating s’mores around a campfire – so I had time to get our own supply of vegan marshmallows & dark chocolate for the kids to enjoy in front of the camera.

Felicia: I would LOVE to do more jobs with a plant-based message! It’s actually how I started our #CampaignforCompassionAndAction. I had so many professional shots with my kids, I decided to just turn them into little advertisements directed towards our friends and family!
Annika: The #CampaignforCompassionandAction series of ads you do on Instagram are wonderful. When did you decide to do this and incorporate it into your social media?

Felicia: Two reasons – I had a bunch of professional photos of me with my girls, and I was noticing people “liked’ my family photos on Facebook – but not my vegan posts. I decided to combine them! Putting meaningful messages along with an action item, on our photos. If nothing else – my girls enjoy them.

Annika: You run two animal focused charities- what is the mission of each?

Felicia: I started Grandpa Dave’s Creature Comforts when my older daughter was about five. I wanted her to grow up giving-back, and realized the best way for me to also stick with it, was to make it official! My Grandpa Dave loved animals and taught me to do at least one good deed per day, so it was an easy matter to combine the two. After I witnessed how poorly the NYC ACC (the municipal shelter system) was run, I decided we could at least provide a bit of comfort to the animals suffering inside. So we started doing collections at schools, offices, apartment buildings – asking for used linens, animal toys & treats. We then started fostering dogs, holding bake sales to buy more items.. anything we could think of to give a little love to the shelter babies.

At an audition one day, I discovered that the Casting Director, Jen Halpern, had a very similar organization, providing aid to the same shelter system with PillowsforPaws.org I wound up joining her Board of Directors, but we still wanted to work together on a unique, positive project that would reach out to those “non-animal” people who didn’t know about the overwhelming number of perfect companion animals sitting in shelters, while they are out shopping for a cute puppy in a store affiliated with puppy mills. So we started the RescueMen campaign promoting #AdoptDontShop. The cornerstone is our annual calendar -Tails of RescueMen USA which features the photos and stories of handsome men across the country, with their actual rescue pets. Our third calendar just came out and we partnered with Rescue Chocolate for an even sweeter gift option – www.RescueMen.org

Annika: What plant based foods do you like to incorporate into your diet for that extra boost and healthy kick?

Felicia: I really don’t feel the need to worry much about supplementing. I start every day with lemon water and peanut butter & banana which I’ve found gives me the right amount of quick energy to get going. I love sprinkling nutritional yeast on a lot of snacks, and I guess if I’m really dragging – I’ve found that watermelon provides a nice kick. And coffee – there’s always coffee.
Annika: What is your fitness regimen?

Felicia:  I love to lift weights. I’m a certified personal trainer, but don’t train anyone but myself. I do it 4-5 times per week. I am more motivated than ever to be in great shape – because like all of us, I’m an unofficial spokesperson for veganism. I’m often asked how I stay in such shape for my age, and now instead of being embarrassed by the question – I proudly answer – “because I cut all animal products from my diet! “ 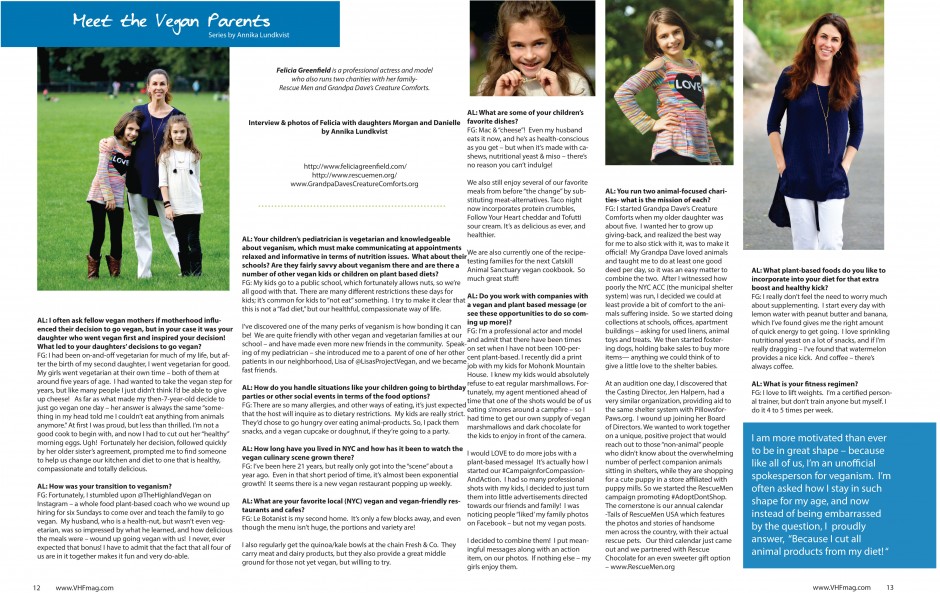 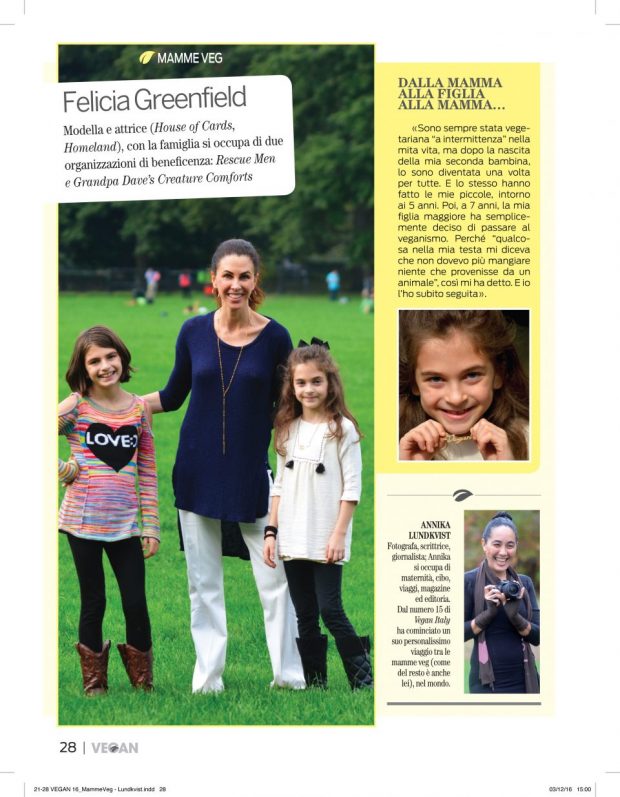 For more Vegan parent interviews please visit my other site: Vegan for all Seasons