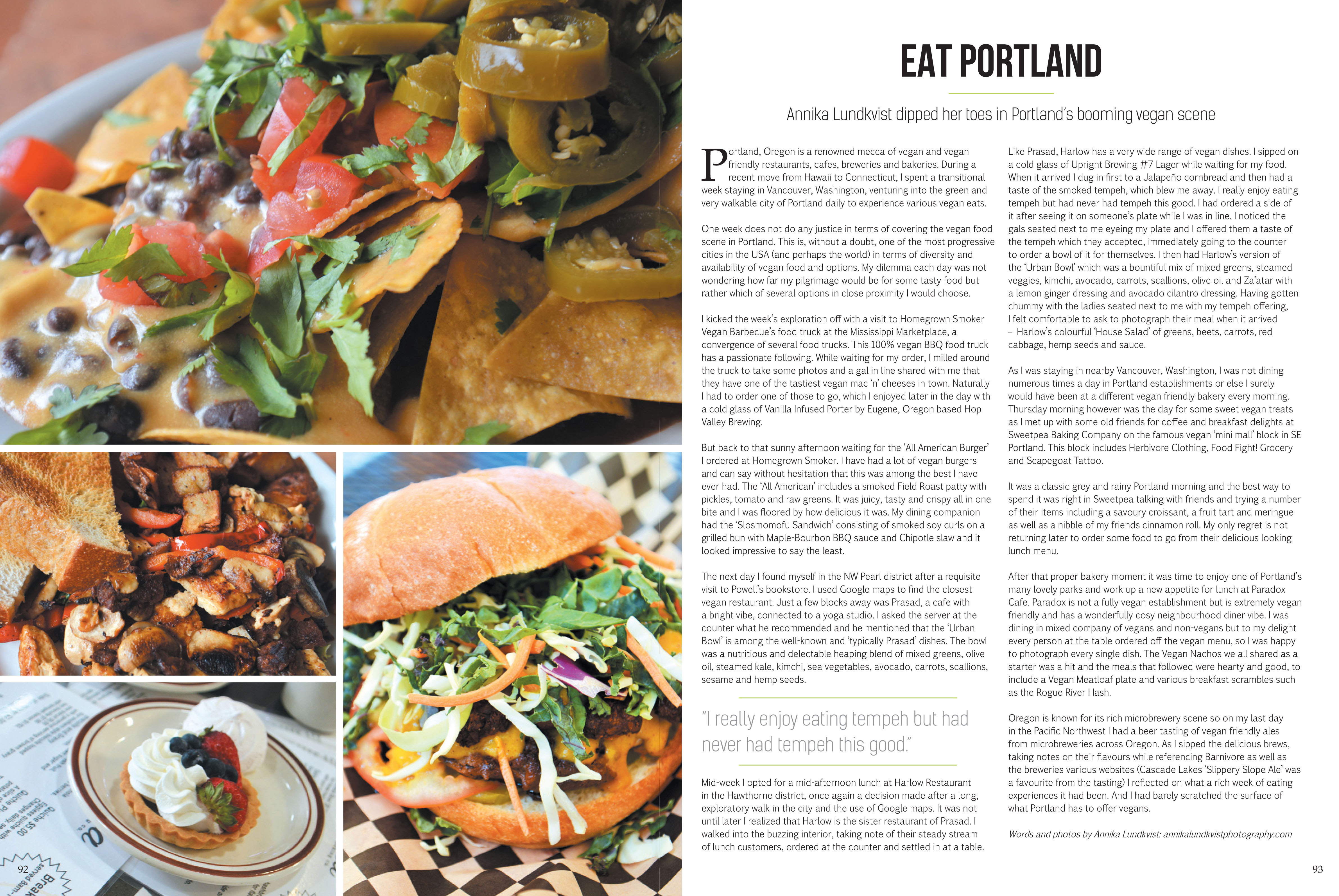 Eat Portland: Annika Lundkvist dips her toes in Portland’s booming vegan scene appears in Issue 8/September 2015 of Vegan Life magazine! This is a piece I wrote & photographed earlier this year on a brief stay in the Pacific Northwest while transitioning from Hawai’i to the Northeast. It is a tasty glimpse into Portland’s very rich vegan food scene and includes experiences at Homegrown Smoker Food Cart, Prasad Cafe, Harlow, Sweetpea Baking Company & Paradox Cafe. 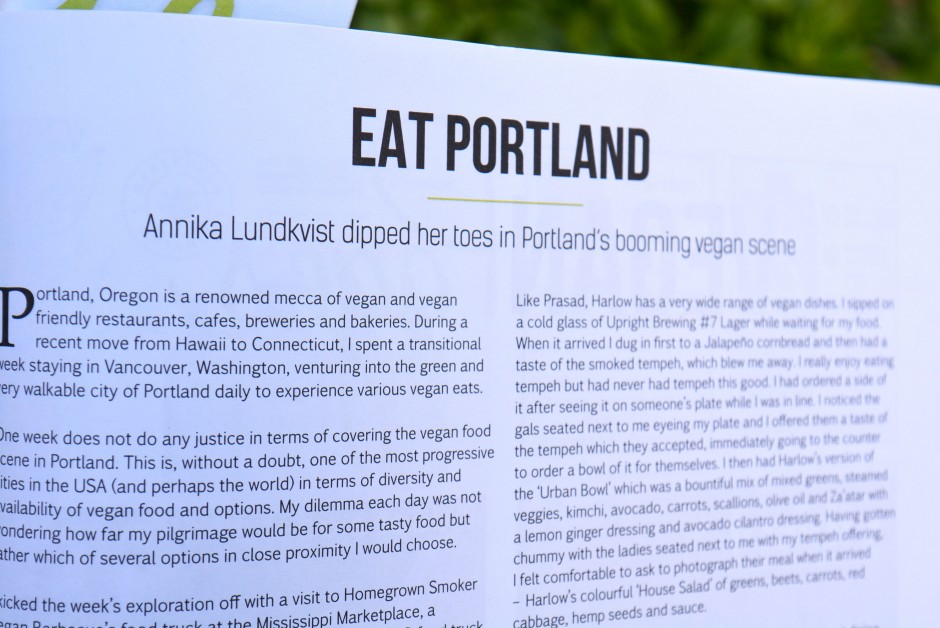 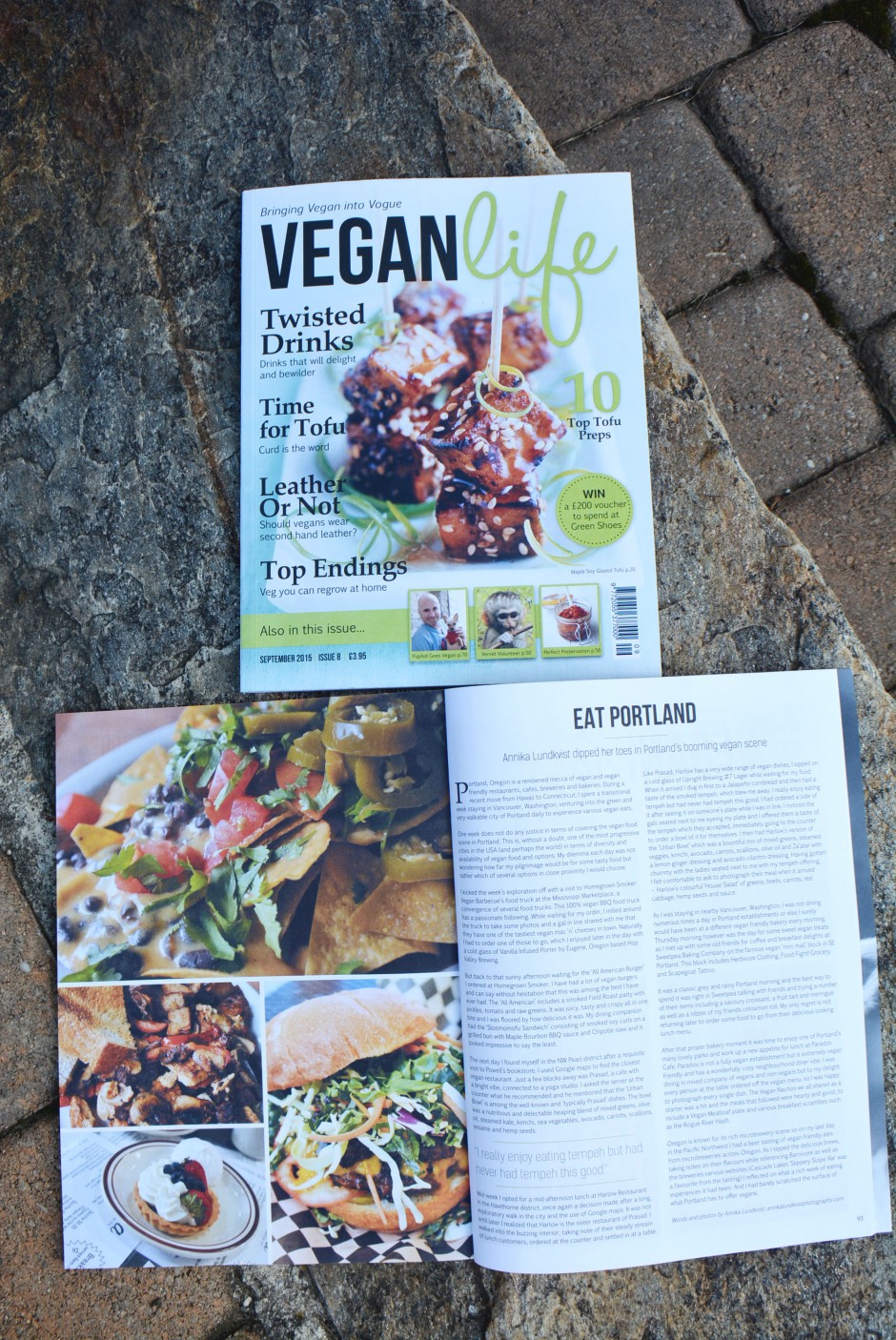 Portland, Oregon is a renowned mecca of vegan and vegan friendly restaurants, cafes, breweries and bakeries. During a recent move from Hawai’i to Connecticut, I spent a transitonal week staying in Vancouver, Washington, venturing into the green and very walkable city of Portland daily to experience various vegan eats.

One week does not do any justice in terms of covering the vegan food scene in Portland. This is, without a doubt, one of the most progressive cities in the USA (and perhaps the world) in terms of diversity and availability of vegan food and options. My dilemma each day was not wondering how far my pilgrimage would be for some tasty food but rather which of several options in close proximity I would choose.

I kicked the week’s exploration off with a visit to Homegrown Smoker Vegan Barbecue’s food truck at the Mississippi Marketplace, a convergence of several food trucks. This 100% vegan BBQ food truck has  a passionate following. While waiting for my order, I milled around the truck to take some photos and a gal on line shared with me that they have one of the tastiest vegan mac & cheeses in town. Naturally I had to order one of those to go, which I enjoyed later in the day with a cold glass of Vanilla Infused Porter by Eugene, Oregon based Hop Valley Brewing.

But back to that sunny afternoon waiting for the ‘All American Burger’ I ordered at Homegrown Smoker. I have had a lot of vegan burgers and can say without hesitation that this was among the best I have ever had. The ‘All American’ includes a smoked Field Roast patty with pickles, tomato and raw greens. It was juicy, tasty and crispy all in one bite and I was floored by how delicious it was. My dining companion had the ‘Slosmomofu Sandwich’ consisting of smoked soy curls on a grilled bun with Maple-Bourbon BBQ sauce and Chipolte slaw and it looked impressive to say the least

The next day I found myself in the NW  Pearl district after a requisite visit to Powell’s  bookstore. I used Google maps to find the closest vegan restaurant. Just a few blocks away was Prasad, a cafe with a bright vibe, connected to a yoga studio. I asked the server at the counter what he recommended and he mentioned that the ‘Urban Bowl’ is among the well known and ‘typically Prasad’ dishes. The bowl was a nutritious and delectable heaping blend of mixed greens, olive oil, steamed kale, kimchi, sea vegetables, avocado, carrots, scallions, sesame and hemp seeds.

Mid week I opted for a mid afternoon lunch at Harlow Restaurant in the Hawthorne district, once again a decision made after a long, exploratory walk in the city and the use of Google maps. It was not later until I realized that Harlow  is the sister restaurant of Prasad. I walked into the buzzing interior, taking note of their steady stream of lunch customers, ordered at the counter and settled in at a table. Like Prasad, Harlow has a very wide range of vegan dishes. I sipped on a cold glass of Upright Brewing #7 Lager while waiting for my food. When it arrived I dug in first to a Jalapeño cornbread and then had a taste of the smoked tempeh, which blew me away. I really enjoy eating tempeh but had never had tempeh this good. I had ordered a side of it after seeing it on someone’s plate while I was in line. I noticed the gals seated next to me eyeing my plate and I offered them a taste of the tempeh which they accepted, immediately going to the counter to order a bowl of it for themselves. I then had Harlow’s  version of the ‘Urban Bowl’ which was a bountiful mix of mixed greens, steamed veggies, kimchi, avocado, carrots, scallions, olive, oil and Za’atar with a lemon ginger dressing and avocado cilantro dressing. Having gotten chummy with the ladies seated next to me with my tempeh offering, I felt comfortable to ask to photograph their meal when it arrived- Harlow’s colorful ‘House Salad’ of greens, beets, carrots, red cabbage, hemp seeds and sauce.

As I was staying in nearby Vancouver, Washington, I was not dining numerous times a day in Portland establishments or else I surely would have been at a different vegan friendly bakery every morning. Thursday morning however was the day for some sweet vegan treats as I met up with some old friends for coffee and breakfast delights at Sweetpea Baking Company on the famous vegan “mini mall” block in SE Portland. This block includes Herbivore Clothing, Food Fight! Grocery and Scapegoat Tattoo.

It was a classic grey and rainy Portland morning and the best way to spend it was right in Sweetpea talking with friends and trying a number of their items including a savory croissant, a fruit tart and meringue as well as a nibble of my friends cinnamon roll. My only regret is not returning later to order some food to go from their delicious looking lunch menu.

After that proper bakery moment it was time to enjoy one of Portland‘s  many lovely parks and work up a new appetite for lunch at Paradox Cafe. Paradox is not a fully vegan establishment but is extremely vegan friendly and has a wonderfully cozy neighborhood diner vibe. I was dining in mixed company of vegans and non vegans but to my delight every person at the table ordered off the vegan menu, so I was happy to photograph every single dish. The Vegan Nachos we all shared as a starter was a hit and the meals that followed were hearty and good, to include a Vegan Meatloaf plate and various breakfast scrambles such as the Rogue River Hash.

Oregon is known for its rich microbrewery scene so on my last day in the Pacific Northwest I had a beer tasting of vegan friendly ales from microbreweries across Oregon. As I sipped the delicious brews, taking notes on their flavors while referencing Barnivore as well as the breweries various websites (Cascade Lakes ‘Slippery Slope Ale’ was a favorite from the tasting) I reflected on what a rich week of eating experiences it had been. And I had barely scratched the surface of what Portland has to offer vegans.