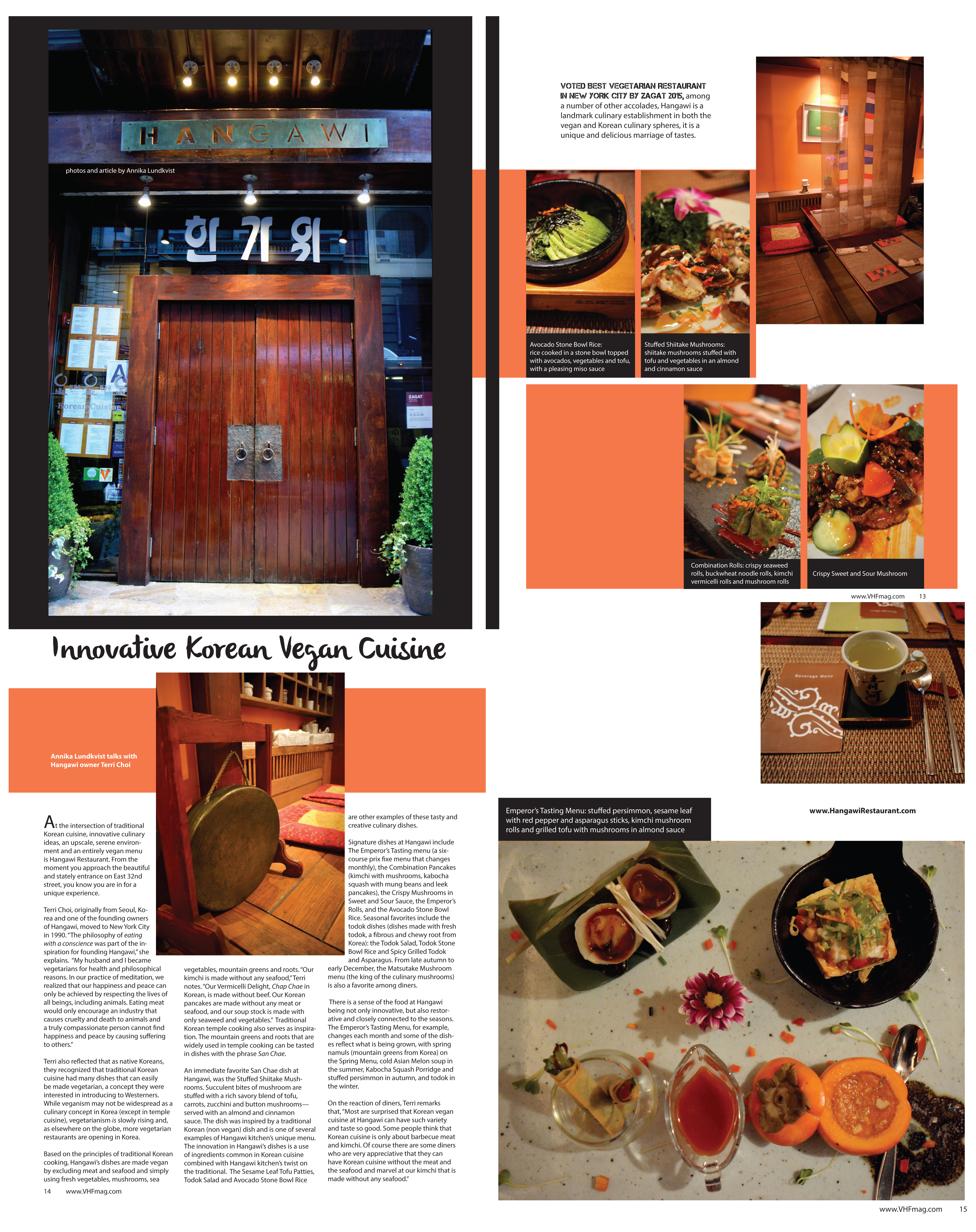 My article on Manhattan based Korean, vegan Hangawi Restaurant, including an interview with owner Terri Choi & photos I took of some of their dishes appears in the March/April 2016 issue of Vegan Health & Fitness magazine! See more of my food photography at Hangawi here. 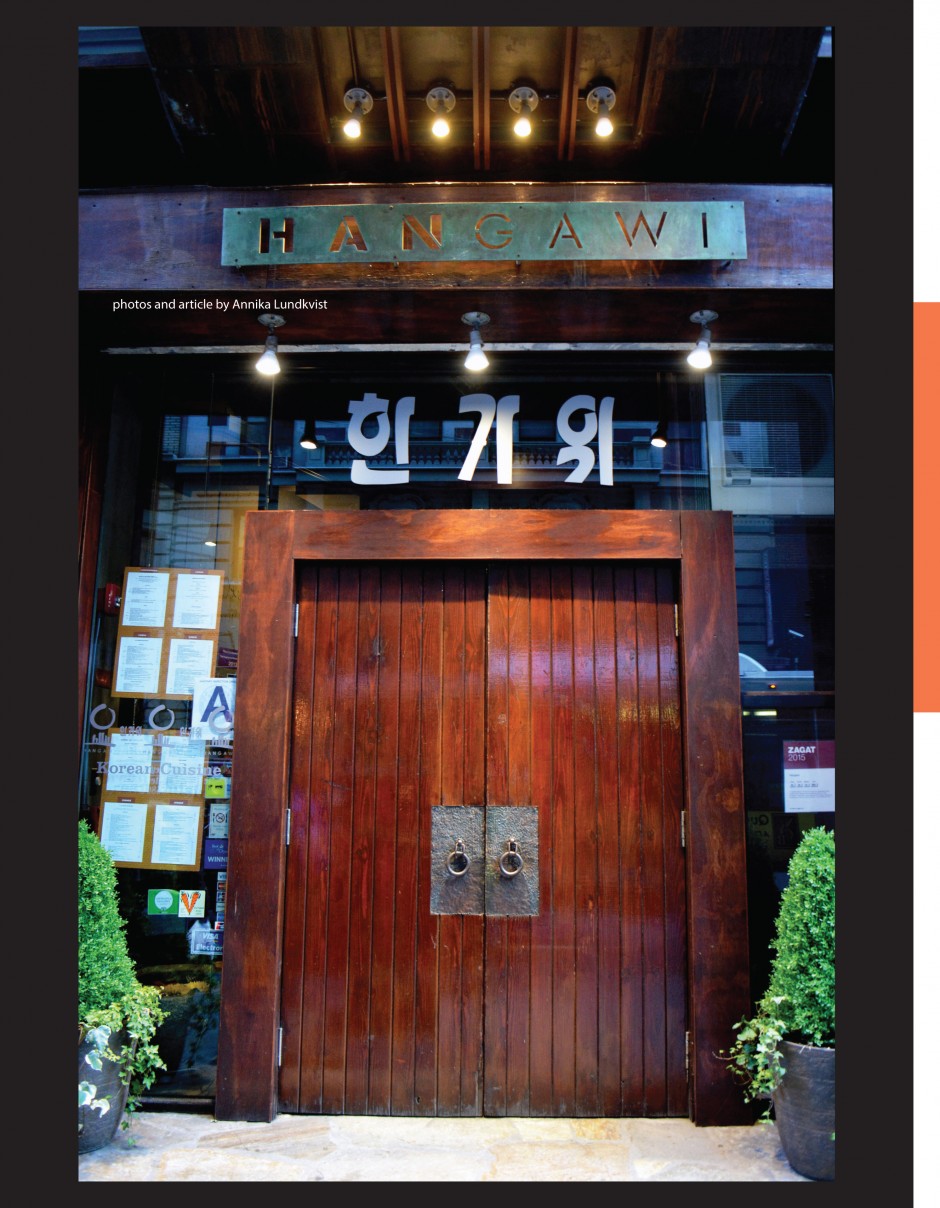 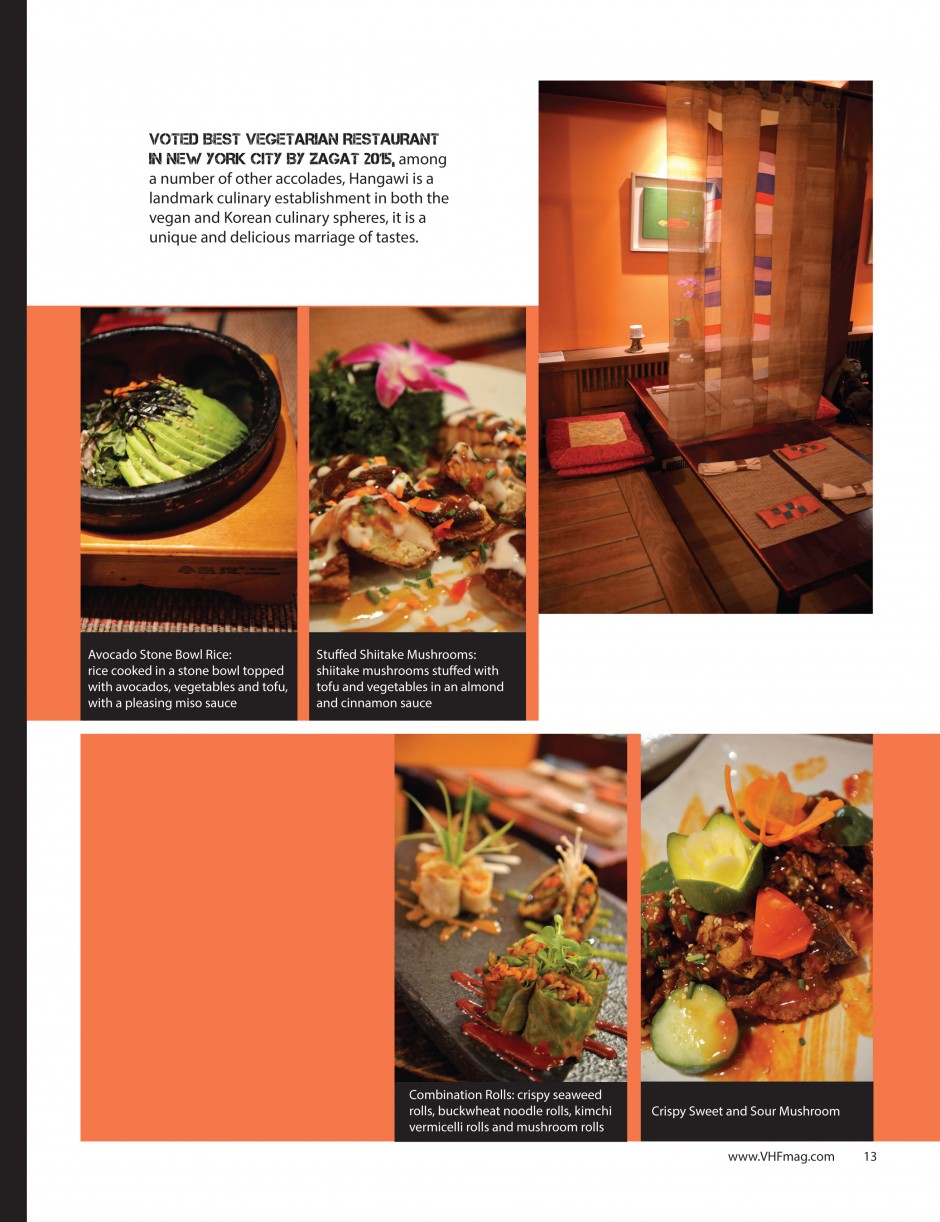 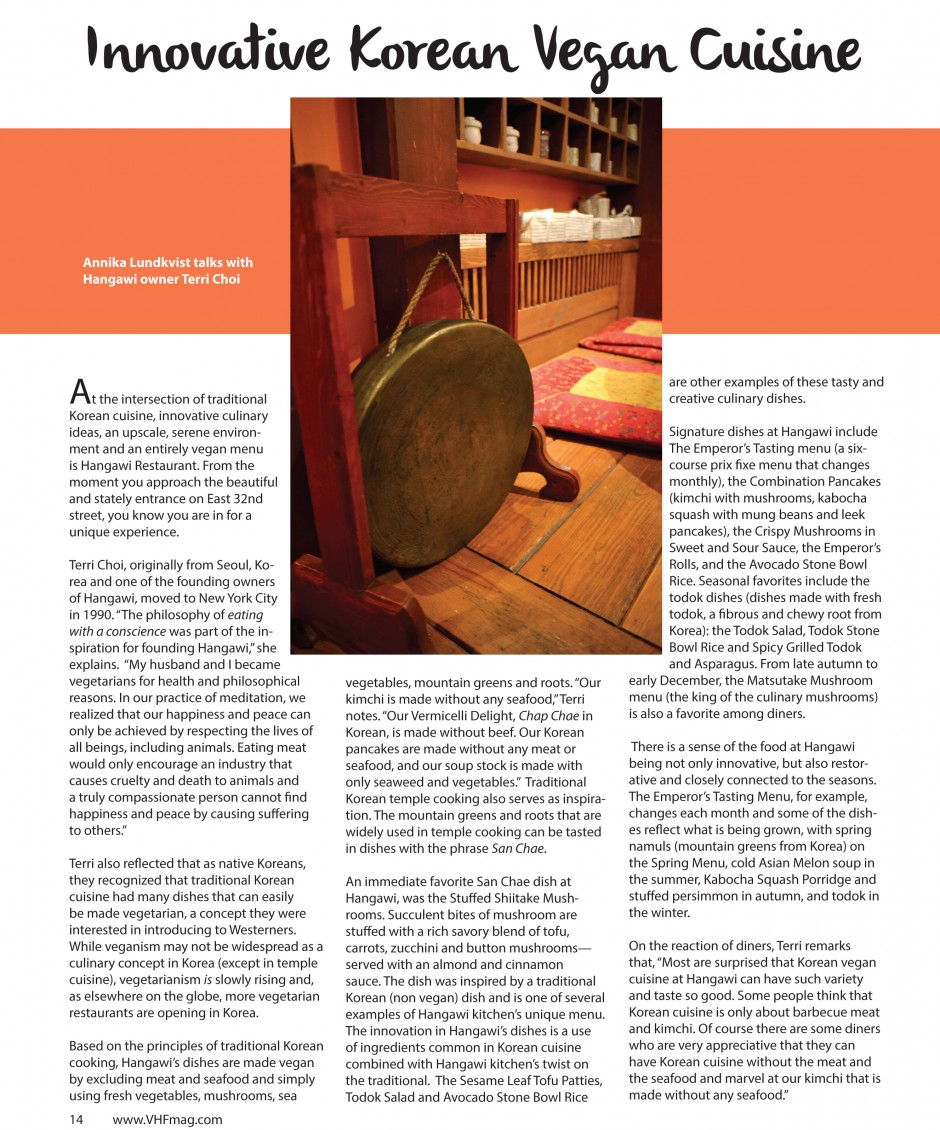 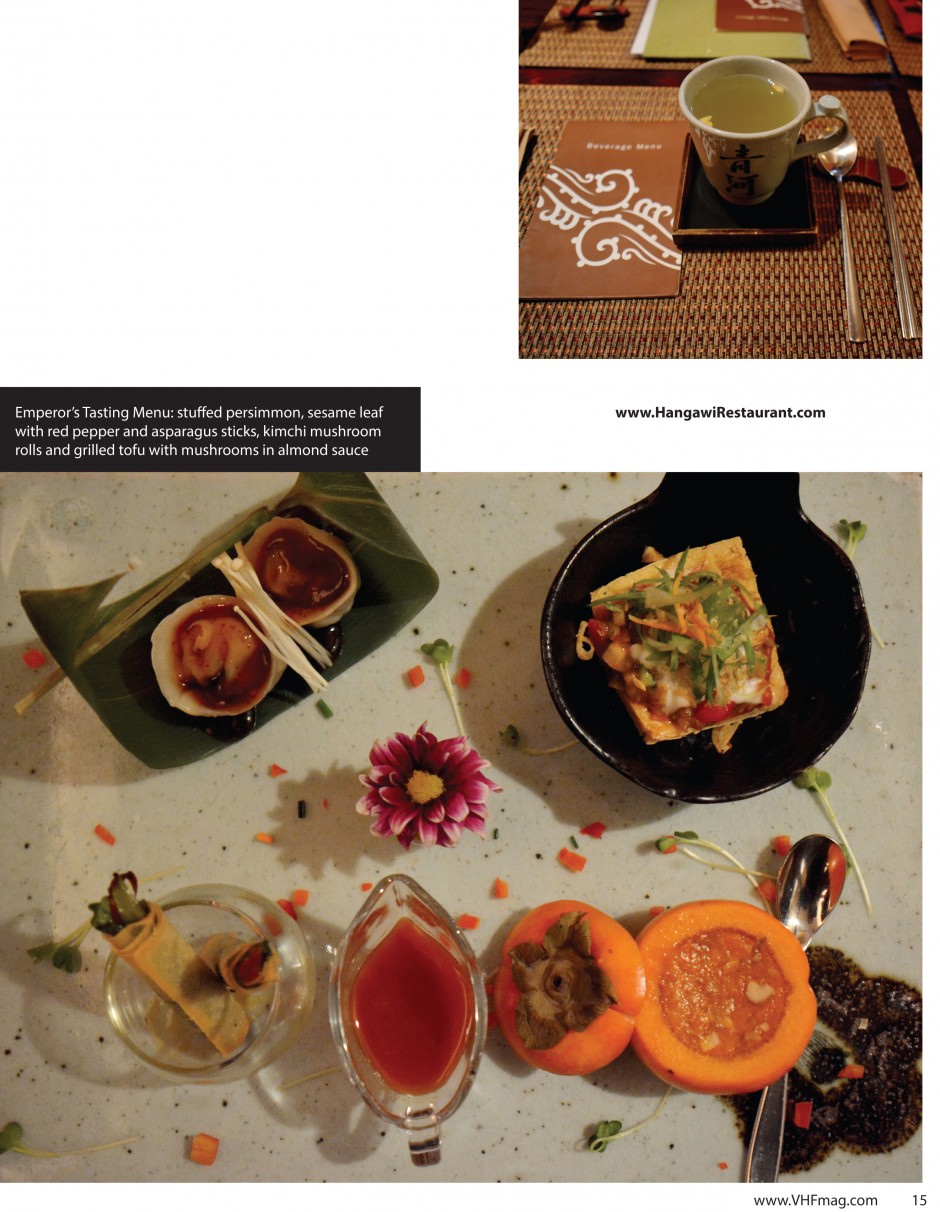 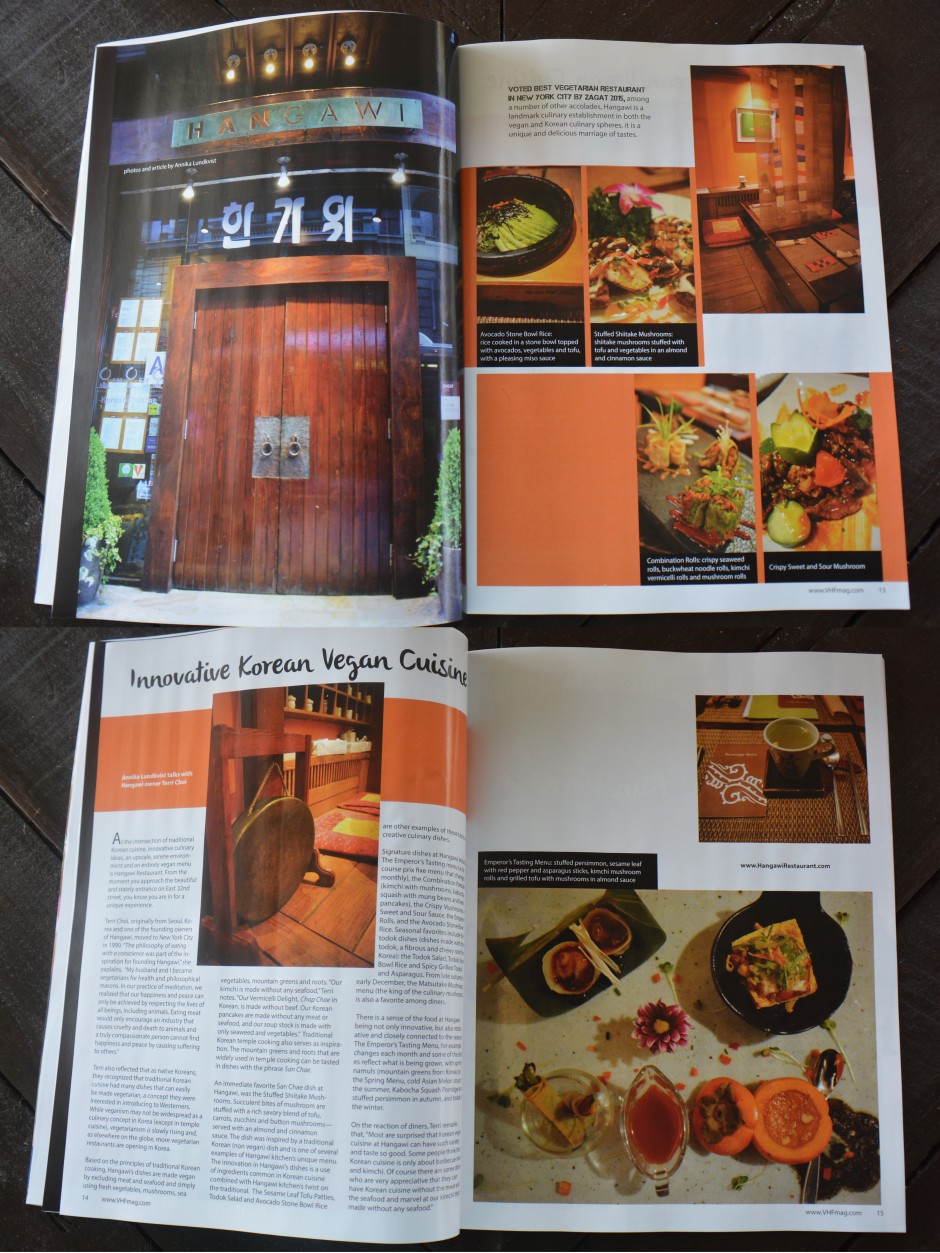 At the intersection of traditional Korean cuisine, innovative culinary ideas, an upscale, serene environment and an entirely vegan menu is Hangawi Restaurant. From the moment you approach the beautiful and stately entrance on East 32nd street, you know you are in for a unique experience.

Terri Choi, originally from Seoul, Korea and one of the founding owners of Hangawi, moved to New York City in 1990. “The philosophy of eating with a conscience” was part of the inspiration for founding Hangawi, she explains. “My husband and I became vegetarians for health and philosophical reasons. In our practice of meditation, we realized that our happiness and peace can only be achieved by respecting the lives of all beings, including animals. Eating meat would only encourage an industry that causes cruelty and death to animals and a truly compassionate person cannot find happiness and peace by causing suffering to others.”

Terri also reflected that as native Koreans, they recognized that traditional Korean cuisine had many dishes that can easily be made vegetarian, a concept they were interested in introducing to westerners. While veganism may not be a widespread idea as a culinary concept in Korea (except in temple cuisine), vegetarianism is slowly rising and, as elsewhere on the globe, more vegetarian restaurants are opening in Korea.

Based on the principles of traditional Korean cooking, Hangawi’s dishes are made vegan by excluding the use of meat and seafood and using fresh vegetables, mushrooms, sea vegetables and mountain greens and roots. “Our kimchi is made without any seafood,” Terri notes. “Our vermicelli delight, chap chae in Korea, is made without beef, our Korean pancakes are made without any meat and seafood and even our soup stock is made only with seaweed and vegetables.” Traditional Korean temple cooking also serves as inspiration, found in dishes with the use of san chae, the mountain greens and roots that are widely used in temple cooking.

While I enjoyed many of the dishes I experienced at Hangawi, an immediate favorite was the ‘Stuffed Shiitake Mushrooms’. Succulent bites of mushroom are stuffed with a rich savory blend of tofu, carrots, zucchini and button mushrooms and served with an almond and cinnamon sauce. The dish was inspired by a traditional Korean (non vegan) dish and is one of several examples of Hangawi kitchen’s innovation to the menu. The innovative element in Hangawi’s dishes is a use of ingredients common in Korean cuisine combined with Hangawi kitchen’s ideas. The Sesame Leaf Tofu Patties, Todok Salad and Avocado Stone Bowl Rice are other dishes exemplifying these creative culinary dishes.

Signature dishes at Hangawi include The Emperor’s Tasting menu (a 6 course prix fixe menu that changes monthly), the Combination Pancakes (kimchi with mushrooms, kabocha pumpkin with mung beans and leek pancakes), the Crispy Mushrooms in sweet and sour sauce, the Emperor’s Rolls and the Avocado Stone Bowl Rice. Seasonal favorites include the todok dishes (dishes made with fresh todok, a fibrous and chewy root form Korea); the todok salad, todok stone bowl rice and spicy grilled todok and asparagus. From late Fall to early December the Matsutake Mushroom menu (the King of the culinary mushrooms) is also a favorite among diners.

There is a sense of the food at Hangawi being not only innovative but also restorative and closely connected to the seasons. The Emperor’s Tasting Menu, for example, changes each month and some of the dishes reflect what is being grown, with spring namuls (mountain greens from Korea) on the Spring menu, cold Asian melon soup in the Summer, Kabocha pumpkin porridge and stuffed persimmon in Fall and todok in the Winter.

On the reaction of diners, Terri remarks that “Most of our diners are surprised that Korean vegan cuisine at Hangawi can have such variety and taste so good. Some people think that Korean cuisine is only about barbecue meat and kimchi. Of course there are some diners who are very appreciative that they can have Korean cuisine without the meat and the seafood and marvel at our kimchi that is made without any seafood.”

Voted ‘Best Vegetarian Restaurant in New York City’ by Zagat 2015, among a number of other accolades, Hangawi is both a landmark culinary establishment in both the vegan and Korean culinary spheres, as well as a unique and delicious marriage of them both.